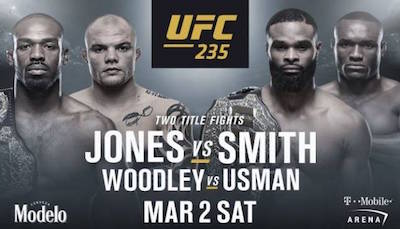 It seems that many have overlooked Smith’s recent resurgence since moving up a weight class, he’s currently listed as 7/1 underdog on some sites. If you’re considering a wager on the underdog here’s this list of sites from My Top Sportsbooks, has you covered as everyone wants reliability, professionalism, and an easy-to-use platform for betting.

Woodley is also favored to retain his title against Usman in the co-main event, though the odds for that fight are much closer than the main event. Woodley won the belt back in July 2016 by knocking out Robbie Lawler and has had three successful title defenses since then (and one draw).

UFC 235 will also feature the return of Lawler as he welcomes unbeaten former Bellator and ONE Championship welterweight champ Ben Askren to the UFC. Also, Tecia Torres faces Weili Zhang in a women’s strawweight bout, and former bantamweight champ Cody Garbrandt takes on Pedro Munhoz to round out the pay-per-view.

UFC 235 is easily the best card of the year so far on paper and with the return of Jon Jones, Woodley’s title defense in the co-headliner, Askren’s UFC debut against a straight killer, and the Torres-Zhang, Munhoz-Garbrandt bouts added on, this is a genuinely stacked UFC pay-per-view not to be missed. MMA fans don’t always get stacked UFC cards anymore so it’s extra nice when it happens.