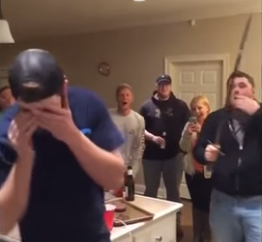 Watch this video then realize you’ve been to a party where this could happen. There’s always some guy who gets way too drunk, or just drunk enough to try and show off. Case in point, here we have an overweight white guy who wants to show off his Samurai sword skills that he learned where? Where did he gain the confidence that he could take a sword and chop off a hot dog that his friend has sticking out his mouth? Two things. He’s probably seen just enough movies with a sword-wielding character to give him false confidence that he himself could do it. And he’s mixed that false confidence with impaired judgment due to the alcohol and walaa… your friend now has no nose. How the f*ck do you feel now asshole? You think there’s just some guy with too much nose like Ariel Helwani standing by ready to donate a portion? Not gonna happen. Sorry. You’re an asshole and now your friend has no nose. Enjoy the rest of the party. And from now on stick to beer pong.