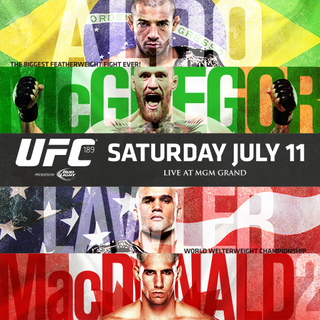 The UFC 189 PPV event is one of the most highly anticipated MMA events in recent memory with UFC featherweight champion Jose Aldo facing Conor McGregor in the main event. The co-main event will also feature a title fight when welterweight champion Robbie Lawler looks to defend his title against Rory MacDonald.

The event will take place at the MGM Grand Garden Arena in Las Vegas on July 11th. Check out the extended video preview in the player below:

Many people think McGregor will be Aldo’s toughest fight to date, and the UFC put out all the stops for the promotion of this fight. The co-main event is actually a rematch from UFC 167 in 2013 in which Lawler won via split decision.

Stay tuned to ProMMAnow.com for more UFC 189 news and coverage.