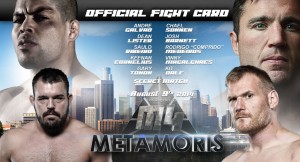 Submission only grappling goes down tonight in Los Angeles with Metamoris 4. Despite a price increase to $30 for the PPV – and they don’t take PayPal, and despite they aren’t credentialing media to cover the event live, we went ahead and popped down the money so you won’t have to if that is your choice. I’ll let you know afterward if it was worth it.

Yes, Chael P. Sonnen is in the main event against BJJ demigod Andre Galvao, and leglock specialists Josh Barnett and Dean Lister will get down in the co-headliner. There’s three other competitive match-ups on the card, along with one “secret match”.

Can Chael even survive? That’s the real question. Chael with no shirt, he dives in for a low single and puts Galvao on his back. Chael inside his full guard. Sonnen takes a cut above his eye, they call time and stop the bleeding for now. Sonnen back inside full guard pushing on Galvao’s chin repeatedly as Galvao tries to maintain wrist control. Sonnen stands up for a moment, lays back inside full open guard. Again. Sonnen now in half guard. Galvao looks for an arm but Sonnen easily stands up out of it. 14 minutes to go. Chael continues to stand up and out of any potential threat. 11 minutes to go and Galvao gets double underhooks with butterfly guard. Andre locks up half guard, with a body lock, he gets an arm under the leg, Sonnen tries to hit a switch but Galvao ends up taking his back with one hook in. Galvao locks up the body triangle, looking for the choke. Not under the chin and Sonnen fighting to peel off the hands. 7 minutes to go and Sonnen is in big trouble here. At just over the 6 minute mark Galvao locks it up and Sonnen taps out. Oh well, sorry Chael. He came in at 230 lbs. tonight. Galvao was 190 lbs. It looked as though Chael was just trying to survive. Chael cuts a nice promo after the match.

Barnett walks out in a wrestling speedo and wrestling shoes — that is all. Oh man. Lister pulls butterfly guard to start. Fighting for wrist control here. Barnett stands, tries to pass guard. Barnett succeeds in moving to side mount. People thought the wrestling shoes would be a disadvantage. Barnett getting good footing though. Bit of a stalemate here as they hang out for awhile. Dean gets to half guard. Barnett stands up after a bit, tries to pass, Dean gives up his back at 11:20 mark. Barnett gets back to side mount, controlling Dean from the top, with one leg hooked. Barnett moves to north-south, briefly looks for an arm as Dean pulls out. Barnett looks for a kimura, Dean is in trouble but escapes. Barnett now in side mount with a schoolyard type choke as Dean gets to his knees now, giving up the back. 6:30 left in the match. Dean is able to get his arms locked around one of Barnett’s legs for the first time tonight but Barnett powers out and is back in side control. Barnett looking for a kimura again. Knee on jaw doesn’t look comfortable. Barnett has dominated this whole match but unfortunately means little unless he can finish. With 2 minutes left Barnett controlling from side mount, one leg hooked. Barnett locks up the neck with a head and arm choke with under a minute to go, cranks it on an exhausted Lister and Lister taps out. That’s the first time The Boogeyman has been submitted in 16 years. Barnett touts catch-as-catch-can wrestling and claims the heavyweight crown.

Jeff Glover, who was commentating, gets up, takes off his suit and walks on to the mat to compete against Baret Yoshida in the night’s “secret match”. Co-announcer Kenny Florian is cracking up. Glover walks toward Yoshida back first, goes for a heel hook. Yoshida escapes. Glover pulls a donkey guard. Back to the feet. Glover sits down and invites Yoshida in guard now. Scramble. Back to the feet. Yoshida jumps for a leg, scramble, Glover ends up on top in side mount, looks for an omoplata. Yoshida gets free and there’s a scramble before Glover resets by standing on his head and inviting Yoshida into his open guard — while standing on his head. What did I just see?

Up and down a few times. 10 minutes to go. Glover jumps guard, back to the feet again. Yoshida tries jumping guard but misses. Glover ends up taking full mount. Yoshida instantly sweeps but is unable to do anything with it. They reset. Scrambling… back to the feet with under 5 minutes left. Glover shows the awkward looking donkey guard again. After a time Glover looks for a footlock with just over a minute to go. Gets up, walks away then dives for it again as Yoshida comes in. Yoshida tries jumping guard again, misses. Match ends with Glover inside full guard.

Keenan pulls guard right away. Goes for a leg right away. Vinny defends well and stands up for a moment before Keenan once again goes for his leg. Keenan goes for a heel hook and Vinny defends. Vinny goes for a toe hold and Keenan winces but escapes. 15:00 to go. Keenan still on his back as Vinny tries to figure out how to get in. Vinny goes for a heel hook, looks very nasty as Vinny cranks it. Keenan doesn’t tap though and is free of it and locks up a leg going for his own heel hook. Vinny is out and stands back up while Keenan waits on his back, looking for an opening. Vinny looking a little frustrated trying to figure out how to get around Keenan’s guard. 10:00 to go. Keenan looks for a toe-hold, Vinny doesn’t sweat it though and Keenan lets it go. Vinny stands back up and tries to figure out the puzzle once again. Keenan using an X-guard and sweeps Vinny. Out of bounds. Ref moves them back to the center with Keenan on top for the first time in the match. Keenan passes to north-south, there’s a scramble until Vinny goes out of bounds and the reset in the center with about 5 minutes left. Crazy scramble and Keenan ends up on top in full mount. Keenan looks for an arm/possible triangle, then moves to side mount, knee on belly and gets full mount after a few tries. With under 2 minutes to go Keenan is looking for an opening in full high mount, trying to make something happen. Keenan locks up a reverse triangle, then tries to switch to an armbar, but Vinny escapes before the bell, stands up and shakes his finger “no, no”.

Only match tonight taking place in a gi. Lots of standup grappling/grip-fighting going on right now, went to the ground for a minute, then back up. By the way, Comprido was Brock Lesnar’s BJJ coach when he was competing in UFC. Saulo is able to get the takedown and ends up on top of Comprido. After a couple minutes Comprido is able to get up, score his own takedown, but Ribeiro is right back up. Back to the grip fighting with about 10 minutes to go. Ribeiro ends up pulling guard, but doesn’t stay there long and it’s back to the standup. With 4 minutes left out of the 20 minute time limit, I estimate less than 3 or 4 minutes have been on the mat so far. … Comprido jumps guard and goes for an omoplata, but Ribeiro takes full mount with 2:30 left in the match. Comprido sweeps with about 1:20 left. Now back to the feet with 1 minute to go. Nonetheless, ref takes the time to fix Ribeiro’s gi and tie his belt. Comprido jumps guard, Ribeiro gives up his back, then gets to guard as time runs out.

That didn’t last very long. Tonon had Dale in trouble with a leglock early on, then was able to eventually jump on and roll with a guillotine that caused Dale to tap. Tonon calls out Kron Gracie after the match.