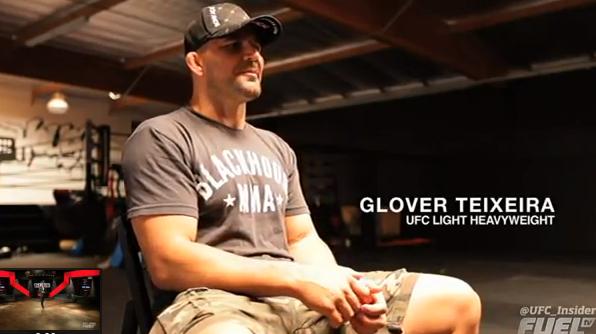 UFC light heavyweight Glover Teixeira made his long awaited UFC debut earlier this year at UFC 146 against Kyle Kingsbury, winning via submission in the very first round. Teixeira is a fighter that’s been a known commodity to hardcore MMA fans for years, but he’s hoping that a couple more wins in the UFC will gain him more recognition. Teixeira was profiled on the “UFC Ultimate Insider” show that airs on FUEL TV Tuesday night. The clip is below:

Teixeira made his MMA debut in 2002 in a losing effort and went on to go (2-2) in his first four fights before rattling off 16 consecutive wins. He has 11 wins via TKO/KO and five wins via submission. He was an early training partner of Chuck Liddell during his championship run in the UFC after moving from Brazil to the United States. Teixeira married while he was here, but allowed his visa to expire and was forced to go back to Brazil to acquire the green card he needed to be in the United States.

The visa issues delayed his UFC debut by about three years, but he will now return to his native Brazil at UFC 153. He was initially scheduled to face former UFC light heavyweight champion Quinton “Rampage” Jackson, but Jackson was withdrawn from the bout with an injury. Teixeira will now face the always tough Fabio Maldonado (18-5) who prefers to strike as did Jackson so this should be a very entertaining bout. Teixeira has good power in his hands and is an accomplished jiu-jitsu player on the ground. Be on the lookout as Teixeira is a possible future darkhorse challenger for UFC light heavyweight champion Jon Jones.