Welcome folks. If you have not yet seen the first episode of “The Ultimate Fighter: Australia vs. UK – The Smashes“, I recommend you do that soon (read this blog first though). You can watch it online (at least in the U.S.) on www.aus.tuf.tv. 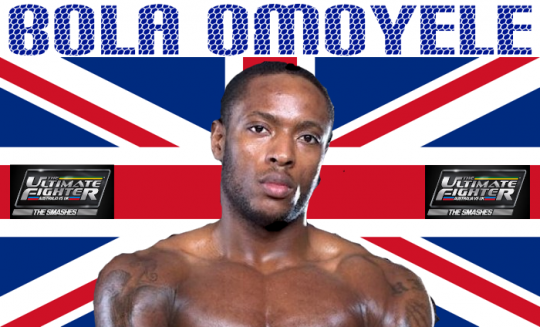 Our official ProMMAnow.com (https://prommanow.com) blogger for TUF: The Smashes will be Team U.K.’s Bola Omoyele. Tell the readers a little about yourself Bola:

“I am a pro MMA fighter (6-1) fighting out of American Top Team/Team Titan. I am 30-years-old from London, England and of Nigerian heritage. I am Father to my daughter Lailah who is 6-years-old and have been with her mother my partner Corinne for 11 long years.” :)

“I started MMA in 2010 after fortunately going to watch Rashad Evans vs. Chuck Liddell (UFC 88/Sept. 2008) live in Atlanta, Ga. whilst on vacation. This was the first time I found out that this great sport existed and I  thank God for that because since starting I have never looked back and has changed my life big time!”

“I was fortunate to be selected for TUF Australia vs UK and I’m looking forwards to shedding some light into the episodes and the behind the scene drama you won’t see.”

First episode we get see how the cast were selected and who the coaches for team Australia and team UK will be, learned that this was the first time ever on TUF that the coaches would not know nothing about the opposing teams fighters.

The cast is merely introduced but viewers from the UK will know most of Team UK fighters because the Brit fans are always loyal, but I still think they could have introduced us individually to help the audience.

Walking into the house for the first time was great not just because how nice the house was but the setup; we had photos all around the house of the best fighters in the world and straight away I got the feeling of “yes this is it, time to shine” and I’m sure every other fighter in the house thought the same thing.

Little after looking around the house we learnt that the Aussie boys had hidden our bags which was a pretty poor effort lol because I really thought the production workers just moved our bags from the passage to create space in the hallway.

That same night we were told, or should I say ordered, to stay awake after been so jet-lagged with no explanation at all, but as time went we were all shocked to know that Dana was in the house and come to have a brief introduction and chat with us before the show kicks off.

It wasn’t very long from when we arrived in the house that Team UK was sparing hard and kicking the sh*t out of each other, I mean literally the next day banging hard just as Brits do. All I remember is Valentino making these loud grunting noises — hahahha — never forget that!

My boy Michael Pastou injures his arm during the sparing session we had and is sent to hospital for scans. At first I didn’t think much of it nor did he, the nut case, but when I saw his face coming back from the scan I just knew this was bad news and I just grabbed him and gave him a hug because he didn’t know what this injury would mean for him on the show!

Dana flipped a coin in order to decide who will have the first fight pick. The Aussie got the fight pic so Ross chose weight category which was welterweights followed by George picking Ben Alloway vs. Valentino Petrescu.

We all thought this would happen already; it was ether gonna be me or Val because we looked the biggest so they wanted to give us a hard weight cut, which to be fair worked well for them as this fight only took place a few days after arriving in the house.

The fight started with Valentino coming forward more aggressively than Ben, both men exchanging but Val getting the edge. Then towards the end of the round Ben got a takedown with Val very active from the bottom nearly securing an armbar.

Second round starts the same with and within a few seconds Ben lands a punch and follows up with a TKO finish. It was a bad day in the office for Team UK. I was totally gutted for Val because he was in control of the fight.

Back to the house that night and it was so quiet it felt like we all lost and that was a sign of unity which was good.

Not much happened on the first episode but I can assure you to stay tuned in to the upcoming episodes (and stay tuned to this blog!) See you soon guys!

By the way guys, if you’re not watching TUF: The Smashes, you’re missing characters like Bola and his buddy “Freakshow” who are both part of Team U.K.: 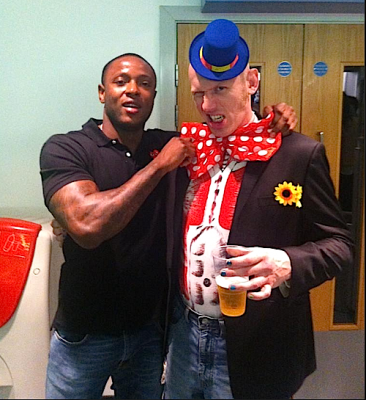