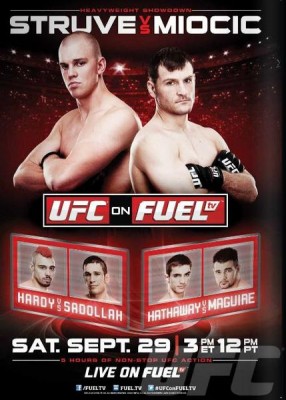 The UFC will be holding its second event in as many weeks on Saturday night when they cross the pond to entertain the folks in Nottingham, England. The UFC on FUEL TV 5 event will be headlined by two up and coming heavyweights in Stipe Miocic and Stefan Struve.

I’ve been extremely busy with work/travel, so instead of doing the usual individual fight previews, I decided to wrap it all up into one here. Check out the main card fight analysis below:

Mills (14-5, 1NC) is coming into this fight off the TKO loss to Rory MacDonald in the co-main event of UFC 145. Mills had won five consecutive fights, including his UFC debut where he dispatched Chris Cope in 40 seconds. Mills is a striker with explosive power who’ll be looking impose his will with a muay thai base. Duane Ludwig (21-13) is coming into this fight off a KO loss to Dan Hardy at UFC 146. Ludwig has dropped two consecutive fights and seriously needs a win here to jump start his career. Ludwig has a muay thai based attacked that’s n0t as explosive, but I would say he’s the more technical striker with better kicks. Both fighters have multiple losses via submission, but I don’t think we’ll have to worry about this one going to the floor much. This one should end violently.

Sass (13-0) is a submission specialist who has won 12 of his fights via submission(nine triangle chokes and three heel hooks). He’s currently (3-0) in the UFC with two “Submission of the Night” awards to his credit. He’s coming off a submission win over Jacob Volkmann at UFC 146. Wiman (14-6) is coming off a unanimous decision win over Mac Danzig in a fight that received “Fight of the Night” honors in October 2011. There’s no question that Sass will be looking to get the submission win in this one. Wiman is a savvy veteran who should give Sass his toughest test to date. The long layoff could be a factor for Wiman coming into this fight. One interesting note is that Wiman has never been submitted in MMA competition. Wiman is really well rounded with solid wrestling, boxing, and jiu-jitsu. I expect Wiman to win the decision here if his cardio is on point. If not, Sass could very well submit him late in the fight if Wiman begins to tire.

Pickett (21-6) comes into this fight off the impressive submission win over Damacio Page in April 2012. That fight received “Fight of the Night” honors, and it was a nice rebound win over getting taken out by Renan Barao at UFC 138. Pickett is a very entertaining fighter with 10 wins via submission and six wins via TKO/KO. Yves Jabouin (18-7) is coming off a unanimous decision win over Jeff Hougland in May 2012 and has won three consecutive fights dating back to April 2011. Pickett is well rounded and can fight well striking as well as on the ground. Jabouin has won 11 fights via TKO/KO and prefers to strike with his opponents compared to only one submission win. Jabouin will have the edge in speed here and is really tough to take down and keep down on the mat. This fight can go many different directions, but it’ll probably consist of Jabouin displaying lots of movement with Pickett stalking him trying to strike or take him down. I think Pickett will have a tough time keeping up with the speed of Jabouin early on. However, Jabouin does tend to slow down a bit as the fight goes on, so Pickett could be effective late in the fight. I think Jabouin wins a decision here or Pickett submits him late in the fight.

Hathaway (16-1) is coming off a unanimous decision win over Pascal Krauss in May 2012. Hathaway has won two consecutive fights since suffering his lone loss to Mike Pyle at UFC 120. Hathaway has won five fights via TKO/KO and four wins via submission. Maguire (18-3) is coming off a submission win over DeMarques Johnson in April 2012. Maguire has 10 wins via submission and three wins via TKO/KO. This is a very tough fight to call here in that Hathaway is fairly well rounded with Maguire being on quite a roll as of late. Maguire is more of a wrestler/grappler and will probably be looking to take Hathaway down in this one. However, I think he’ll struggle with the larger Hathaway who has fought and defeated some very good competition since joining the UFC(i.e. Diego Sanchez, Rick Story). I think Hathaway takes the decision here or Maguire gets the submission win.

Hardy (24-10, 1NC) is coming off a career saving win over Duane Ludwig at UFC 146. Hardy had lost four consecutive fights before knocking out Ludwig in the first round winning “Knockout of the Night” honors. Hardy has won 15 fights via TKO/KO with one win via submission. He prefers to strike with his opponents, but has shown suspect takedown defense throughout his career. Sadollah (6-3) is coming off a split decision win over Jorge Lopez in May 2012. It was a nice rebound win for Sadollah who lost a unanimous decision against Duane Ludwig in August 2011. He really got beat up in that fight with some nasty leg kicks from Ludwig. Hardy is the bigger fighter who depends more on his hands than his feet to strike, whereas Sadollah probably uses kicks a bit more than Hardy. Hardy definitely has the power advantage here in my opinion, and I think Sadollah’s chin is somewhat questionable. If Hardy can keep it on the feet, I expect him to put Sadollah away via TKO in this one unless Sadollah is able to be successful in taking him down and keeping him there.

Miocic (9-0) is coming into this fight off the TKO win over Shane del Rosario at UFC 146. Miocic has seven wins via TKO/KO and one win via submission. Miocic is a former golden gloves boxer, and was also a high level division one college wrestler. Struve (24-5) is coming into this fight off the first round submission win over slugger Lavar Johnson at UFC 146. Struve has exceptional size at close to seven feet tall, a good chin, and a dangerous ground game. I think this will be a very entertaining fight in that both guys usually come to fight. I think Miocic should be able to win this fight. Struve doesn’t use his length well at all, and tends to take a great deal of punishment although he has a habit of coming back to win. Miocic should be able to take Struve down if he wishes to do so. I think Struve’s chances of submitting Miocic are relatively low. Struve has been finished via heavy hitters three times in the UFC, and this one will probably be no different unless Struve can somehow get Miocic to the ground.

Be sure to join us on Saturday for live coverage of UFC on FUEL TV 5.