Introduction WWE is known for the rich wrestling history that it provides its fans via their network. Throughout time professional wrestlers have made a name for themselves by displaying shocking moves in an aim to defeat their opponents. These horrific ideas have received critics in equal measure. However, this has not barred them from being … Read more 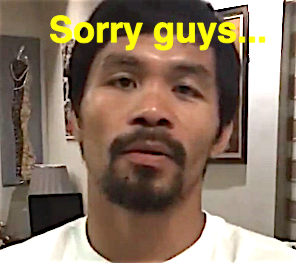 Manny Pacquiao is currently in training for his upcoming rematch with Timothy Bradley Jr. in April but he’s also campaigning for a seat in the Philippine Senate in May and recently did a TV interview where he was a bit too forthcoming with his views on gay marriage. “If men mate with men, and women mate with … Read more

Oh religion. It can be a beautiful thing. But it can also get warped by our human ideals and our ego mind. Case in point is a preacher from Youtube channel Stedfast Baptist Church who believes UFC featherweight champion Conor McGregor is wicked, full of pride, and says he’s going to pray for God to strike … Read more

Edge and Christian will host the final Raw of 2014 tonight from Washington, D.C. Daniel Bryan has an important message. Former NXT tag team champions The Ascension will make their WWE debut. How will Dolph Ziggler close out the year on Raw? Will Miz still pursue Naomi after Jimmy Uso taught him a lesson on … Read more

Every major MMA gym in America seems to have that one guy; that guy that may not be the biggest name, and may not fight in a major organization, but he is guy that terrorizes his teammates in training whether it’s on the ground or sparring in the ring or cage.

There is a new interview with David Samuels by Luke Thomas from MMA Nation that MMA fans will want to hear.

You will remember Samuels as the journalist from The Atlantic who did the in-depth article on Quinton Jackson entitled “Rampage.” He also had seperate interviews with B.J. Penn, Lorenzo Fertitta, and Arianny Celeste, each of which are insightful and well worth your time.

In this interview with Samuels he discusses what he has learned through his investigative journalism and spending time with these various UFC figures. He discusses who REALLY runs the UFC as well as if the UFC is going to succeed in the long run or is this thing going to wind down one day.