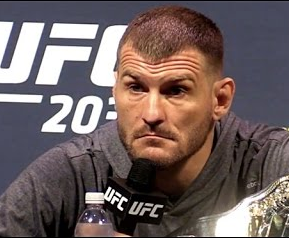 With Jon Jones nixing a potential heavyweight scrap with former champion Stipe Miocic in a #1 contender bout it leaves Miocic in limbo. Derrick Lewis is next up for current champ Francis Ngannou later this year which means if Jones sticks by his refusal then the UFC will have to find someone else to face Stipe. Who then?

According to recent comments from UFC head Dana White it looks like Miocic may just remain in a holding pattern. Here’s what he said on The Jake Asman show…

Well, Jon Jones made it very clear that he has no interest in fighting Stipe, so it doesn’t really matter….What you do is you do the fight with Derrick Lewis and Francis and then Stipe gets the winner.

It looks like Miocic May not fight again until spring of next year unless Francis makes a quick turnaround should he defeat Derrick Lewis. If Lewis wins it would be hard to predict when he might decide to defend his newly won belt.