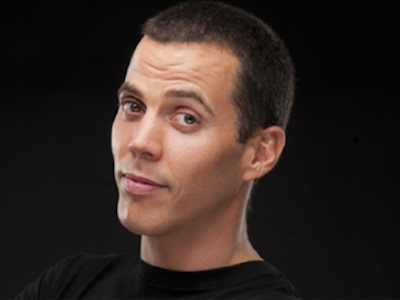 Former Jackass star Steve-O is currently on a “Bucket List Tour” where he’s traveling around doing comedy and also apparently filming himself as he checks certain things off his bucket list. It seems one of those things on his bucket list was to get cauliflower ear. For this he needed some help and enlisted the aid of former UFC light heavyweight champion and MMA legend Chuck “The Iceman” Liddell. They didn’t give all the details on how it happened, we’ll have to wait for the video on that, but we can certainly see the aftermath and it’s not pretty.

“FYI this is not my ear, i did this to SteveO and had so much fun doing it!”

Steve-O explained what happened to cause this mangled mess:

“Last night in my quest to get #CauliflowerEar, something weird happened and I ended up needing stitches. I put a bunch of glue on it instead, so we could keep filming, then we had another total freak accident and I had to keep piling on more glue to close it again. At this point it’s hard to tell what’s going on with it under all that glue, but what’s certain is that @chuckliddell and I got a whole bunch of hilarious new footage last night. Now I’m off to Columbus, Ohio, where my shows are already sold out — swipe to see what I look like on this airplane, and if you’re in any of the cities we’re headed to next, don’t wait to buy your tickets to see this absurd multimedia show— it’s really the next level of stupid… #SteveOsBucketListTour#GoingEverywhere2019
#ThanksSoMuchEveryone”

We agree Steve-O, this really is the “next level of stupid”. Congratulations.

The 48-year-old Liddell is currently training for an upcoming trilogy fight against fellow former UFC light heavyweight champ and arch-rival Tito Ortiz, which will take place Nov. 24 under Golden Boy Promotions at The Forum in Inglewood, Calif. and will air live on Pay-Per-View.