Top 5 MMA Fighters That Went From Elite To Terrible 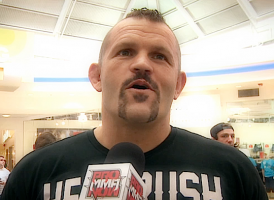 It was painful to watch former UFC light heavyweight champion and TUF winner Rashad Evans get knocked out in his fight against Glover Teixeira on Saturday night. I couldn’t help but think the game has passed Evans by, more so due to father time and injuries than anything else. However, it’s clear he’s not the same fighter he was just a few years ago.

That got me to thinking, there have been a number of fighters that were fighting at an elite level and for whatever reason just fell off like Big Mac toppings on a sloppy sandwich.

I could have made a top 10 list and included a ton of them(which probably would have included Evans), but instead I wanted to do a top 5 list of fighters that were elite but went downhill incredibly fast. Here we go is order from 5 to 1.

Father time and the wear and tear of training coupled with actual fight time can take its toll on fighters seemingly overnight. How would your list look?