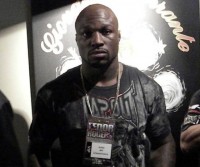 King Mo has always been outspoken. In a recent interview with Submission Radio, Mo spoke up about the differences between MMA and Pro Wrestling. He is an MMA fighter and TNA pro wrestler so comparing the two was easy.

“Pro wrestling is harder than MMA. Here’s the reason why, in MMA I can avoid damage.”, King Mo said. ” I can circle, I can pull guard, I can take you down, I can push you to the cage, hell I can tap, I can verbally give up. In Pro Wrestling I’ve seen guys tear their ACL and continue to wrestle solely to please the crowd. You know regardless of what happens, the show must go on. You go out there, people are out there at one point they were wrestling like three times a week, four times a week. You know Hulk Hogan’s leg drop shrunk his spine, but guess what, he was still doing it. You know, your body is banged up, you’re taking bumps, you’re flying over ropes, through the ropes, hitting the ropes, hitting the turnbuckle, getting body slammed, taking a bump. You know that stuff breaks your body down, and you could ask any wrestler, you get a wrestler that’s 47 years old and you get an MMA fighter that’s 47 years old, the wrestler’s gonna look like he’s sixty compared to an MMA fighter. You get Randy Couture and compare him to someone like the Undertaker, I know Undertaker’s a little older but I guarantee you the Undertaker at 47, 48 years old was far more beat up then what Randy Couture was.”

Mo also talked about his arrival in TNA after leaving OVW, and competitiveness with Kurt Angle.

“Well here’s the thing right, when I left the Olympic trials I went to OVW and they offered me a contract. I was like ‘I wanna go’, but then I was like ‘hey, you know what, I wanna be like a two time Kurt Angle. I wanna be an Olympic champion, then go to MMA be a champion, then go to pro wrestling’. So I was like, that’d be perfect cause then no one else has done that. ‘Cause Kurt Angle came in the Olympic champion, so I wanted to one-up him.”

“I loved it, It was great. I was up there with Mark Henry, Scotty 2 Hotty, The worm, Gail Kim was out there, Nathan Jones was out there. It was surreal, Carlito Cool (was out there). I was out there, man it was fun man. I liked the WWE, but I’m a TNA person. I feel like top to bottom TNA has better wrestling, now WWE might have a better show as far as atmosphere and being around longer, but I feel like top to bottom TNA has better wrestling. Like WWE has great wrestlers  like (Dean) Ambrose and (Seth) Rollins, and with the Shield and some other guys like Cesaro. They’re great, but if you look at the whole card you see matches where you’re like ‘ah boring’, too many promos, too much talking. I watch both, (but) I fast forward most of the WWE because the promos are so long. Their talking in promo’s, I’m like ‘fast forward. Ok you wasted 45 minutes, it’s taken like three matches’ you know what I’m saying. But with TNA you see a promo there, then there’s matches, matches, matches, small promo, more matches, and the promo’s are shorter in TNA.”
Finally, King Mo spoke about Brock Lesnar’s decimation of John Cena. He also discussed Lesnar’s booking as champion.

“I love it, because here’s the thing, right now John Cena just put Brock Lesnar over big time, so now Brock should ride a wave. Whoever beats Brock is going to be the next big thing of the WWE. Because for him to dominate John Cena like that, whoever beats Brock has to be the man, and it’s gonna be someone like Roman Reigns or maybe Cesaro, it’s gonna be someone they wanna give a big push to. So you know it makes sense. Creative knows what they’re doing, even in TNA when they do something like that, they do it for a reason. A lot of fans don’t get it, but in a long run it makes a lot of sense.”

Here is the full interview with Submission Radio.