Weigh-in results – ONE FC 19 ‘Reign of Champions’ in Dubai 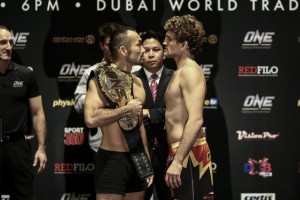 Mohamad Walid failed to make weight and his bout against Vaughn Donayre will now be at catchweight of 76.5kg. The card is set to be the biggest event in ONE FC history, and is headlined by three ONE FC World Championship bouts.

One FC: Reign Of Champions Weigh In Results

Fans in Asia can catch all the action live on FOX Sports. Check your local listings. Also, fans from around the world can witness the action online via live streaming at www.onefc.livesport.tv. The event will be available for purchase at just US$9.99.