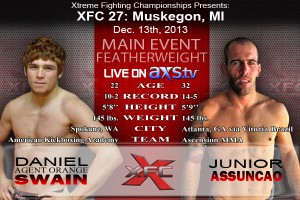 Swain (10-2) is a Pancrase and MFC veteran that is looking to continue on his winning ways. He is currently riding a four-fight winning streak with his most recent victory against Tomonari Kanomata at Pancrase 248 in Japan. “Agent Orange” is a wrestling standout who is now training with Trevor Prangley’s AKA school.

Assuncao (14-5) is coming off a big submission victory at Premium Fight Championship 2 against Guilherme Faria de Souza. The Brazlian was on a six-fight winning streak and got a call back to the UFC in 2011 where he picked up a unanimous decision victory over Eddie Yagin. He lost his next match-up to Ross Pearson at UFC 141 in December 2011 and was released from the promotion.

XFC 27 is set to go down on December 13 from Muskegon, MI. The co-main event will be for the featherweight championship, as Farkhad Sharipov will take on Deivison Ribeiro.