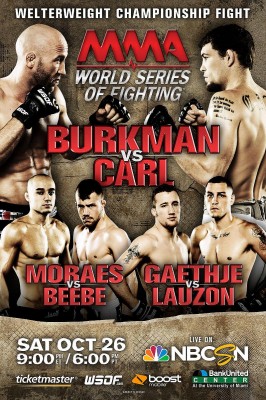 Tickets for the fight card, which start at just $29, are available at all Ticketmaster locations, Ticketmaster.com and charge-by-phone at (800) 745-3000.

The following are fighter highlights from the conference call:

“My camp went really well. I’m excited for this because I was a part of the very first World Series of Fighting, and I’m excited to be a part of the first title shot. I’m looking forward to the challenge that Steve Carl presents, but I’m more prepared than ever for this fight. I know it’s going to be an entertaining card and a good show.”

(At 8-1 in your past nine fights, what do you credit for your recent success?)

“After the UFC, by taking that year off, I really just changed my lifestyle. I had a back injury, and I was told by three different surgeons that I should get surgery and I shouldn’t fight anymore. I had a herniated disc in my neck. I had four bulging discs in my back. I had arthritis, and I had nerve damage. Taking that year off, I had to change everything I did about my diet. I quit drinking. I quit going out. I started going to bed earlier. I really just changed my whole life.”

(What would a title win mean for you?)

“I think it will be a feeling of accomplishment. Any time that you have something taken away from you and people tell you you shouldn’t do it and you change your life and live a way that you can come back and get healthy, I think winning a championship would complete that comeback. It’s just a great sense of accomplishment, and moving forward, I would be proud to represent this organization.”

“I’m super-excited for this event. I’m not only really excited to fight for the title and to be able to fight Josh Burkman in the main event, but I’m excited for the rest of the card, also. I’m really looking forward to watching some of these matchups. I just can’t wait for this weekend, and the colder it gets up here in Iowa, the more excited I get to leave and go down there to Miami.”

(Do you feel like you’re being at all overlooked coming into this fight?)

“I’m good with the way things are going. I think if people are looking at this thinking Josh Burkman is getting more hype and more credit going into this fight, well he deserves it. Look at the three wins he just put together. Josh Burkman is coming into this fight as a favorite, and I’m completely OK with that. That’s fine with me because at the end of the day, I’m still going to be that cage with him, and I’m still going to be in that fight. No matter what anybody says, he still has to beat me, and I still have to beat him, and that’s the bottom line.”

(What were your initial reactions to receiving the matchup?)

“When they told me about it, I was super-excited. I have wanted to fight Josh Burkman since last year when we fought on World Series of Fighting 1. He was on a roll, and he was just climbing the world rankings. That’s what I want to do. Since then, Josh Burkman has really shot up there, and now he’s considered to be one of the best in the world, and I can’t be more excited to want to compete with him.”

“I’m ready. I trained harder than ever, and I’m looking forward to it. This is a great opportunity. My opponent is a tough guy. You look at the fights and see Josh Burkman, Steve Carl, Jon Fitch, Marcelo Alfaya, Miguel Torres – all those guys fighting on the same card – for me, it’s a pleasure. I’ve spent hours watching those guys, and now I’m here fighting.”

(You had a few injuries in your last fight. Are you fully recovered?)

“I’m feeling great. My body is all recovered. I got hurt a little bit, but I’m ready 110 percent.”

“It’s a huge honor being on the card. I’m fighting a very top-tier opponent. Just to be on the same card as all these guys on here, it’s a bunch of legends on the show, so I just want to say thanks to World Series of Fighting and Ray Sefo for giving me an opportunity to go out there and put on a great show. I’m going to give it everything I’ve got in the cage on Saturday night.”

(How has your preparation been for this fight?)

“This is going to be probably the biggest fight of my career, so I’ve been training that way, and I’m ready to bring it. I think it’s going to be a fight that’s worthy of co-main event status, so I’m excited.”

“I’m super-pumped for the fight. The whole card is stacked all the way through. World Series of Fighting is doing an outstanding job with putting on these cards and these shows. NBC Sports Network is a fantastic platform for doing good numbers on the live shows and the replays. The organization is only going to keep growing and keep getting stronger. The guys on the undercard are going to start being main-card guys, and everybody is going to know who they are. I’m excited to be a part of this, and I’m excited to help along with this growth. I can’t wait for this fight. I know Marcelo is going to bring it, and it’s going to be a hell of a fight.”

(With your recent loss, is there more pressure now to win?)

“I always feel that I need to win. I wouldn’t be in this sport if I didn’t feel I needed to win every single fight. I want to go out there and perform well, perform the way I can, and put myself in a position to get even bigger fights in the future.”

“I’m excited for this fight. I’m training hard. Jon Fitch is a tough guy. Thank you so much to World Series of Fighting for giving me this opportunity. Thank you Jon Fitch for taking this fight. I think it’s going to be one great fight.”

“I’m happy to be on the card for World Series of Fighting 6. I’m happy they were able to get me on. I’ve been in this sport 15 years, and I’ve seen a lot of organizations and I’ve fought for a lot of different places, and they’re one of the organizations that are growing. They’re going to get to the top, and I’m happy I can be a part of that process. Preparations have gone very well for this fight. I’m looking to get back in there and get some respect – get back to the top where I was before.”

(Where have you been during this long layoff?)

“I’ve been real busy since the last World Series of Fighting. My lease was up on my gym. I had a gym in Hammond, Ind., and I went back and was doing my taxes, and I saw how crazy my overhead was. So I had to make a change if I wanted to sustain profits in my gym. So I had look for a new location, and I found a spot close to my home. My daughter was starting was school, so I wanted to make sure that I was around for that. And as I was doing the move to the gym, I found out it was riddled with mold crawling all through the installation, so I had to basically do a lot of work to remodel the whole gym. So basically the whole summer I spent training and doing carpentry work and laying down a new floor for the new gym. I made that move in July, and then I started training again in August. I got the call from World Series of Fighting to come back and take a fight, and I want to get back in there and start fighting again. I’ve been out for a while, and I missed it. I just can’t wait to get back in there and show what I can do.”