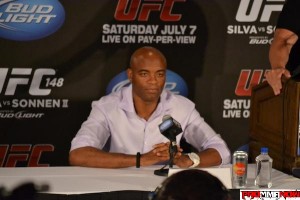 UFC President Dana White has stated that Anderson Silva will be granted an immediate rematch against Chris Weidman. He said it on Saturday night after the upset loss, and said it even prior to the event on some foreshadowing stuff.

However, Silva seemed unwilling to accept the immediate rematch and even remained noncommittal on fighting again when talking with Joe Rogan in his post-fight interview. I don’t know, maybe his brain was still scrambled from the punishment he had taken just minutes earlier.

However, if Silva remains unwilling to accept the immediate rematch it would hurt his legacy more than the actual loss to Weidman.

I give credit to Weidman for taking advantage of Silva toying with him. That’s exactly what he was doing, and it was evident that there was a clear gap in skills between the two competitors as Silva taunted Weidman and landed strikes whenever he wanted.

I don’t think many people can clearly say with conviction that Weidman is the best middleweight in the world. So yes, Silva lost to Weidman but it was more so him beating himself than Weidman flat out beating him.

Nevertheless, Silva not accepting the immediate rematch(and he very well may do so in the future) just strikes a nerve with me. I don’t see how any fighter would not want to avenge a loss like that, especially when he hasn’t suffered a legitimate loss in nearly a decade. There is no other fight out there for him to take. There are no superfights against Jon Jones or GSP that he can take at the moment. The crazy thing is that the immediate rematch would probably do superfight PPV numbers! Nobody wants to see Anderson Silva fight some run of the mill fighter in his next fight. If anyone deserves the immediate rematch it’s Anderson Silva after being such a dominant champion for so long. Chris Weidman deserves the immediate rematch to truly validate himself as the champion by defeating Silva without the perception that Silva wasn’t fighting at 100%.

If Silva never fights again I think many will still consider him the greatest MMA fighter of all time. However, if he isn’t interested in avenging the loss to Weidman, I think that narrative will always put a little asterisk beside his career for me. I’d rather him fight Weidman and lose again instead of not taking the fight at all.

How do you feel about the immediate rematch should Silva not take it?