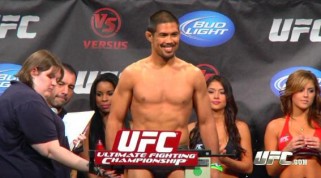 After such adversity following his loss against Chris Weidman at UFC on FUEL TV 4 back in July 2012, it was great to see Mark Munoz pick up a big win over a tough Tim Boetsch at UFC 162 this past Saturday, July 6.

Many MMA fans will be aware of the struggles that Munoz faced following his loss to Weidman. Earlier this week at the UFC 162 pre-fight presser Munoz spoke of the depression he went through, and explained how he had turned to food for comfort.

An emotionally beaten and out of shape Mark Munoz soon realised that he needed to get himself back into training and reignite his campaign to become UFC middleweight champion. Whilst dealing with the depression Mark reached a weight of 261 pounds, but managed to turn things around and drop down to 199 pounds not long out from his fight with Boetsch at UFC 162.

The newly focused and in shape Mark Munoz looked great in his fight on Saturday night, earning himself a unanimous decision victory. “The Filipino Wrecking Machine” was able to dominate his opponent, using his high level wrestling and effective striking techniques. At certain points in the fight it seemed like Boetsch had no answer for Munoz, who looked like an improved version of the fighter we had seen build up a four fight winning streak during 2010/2011.

In the main event at UFC 162 Chris Weidman defeated Anderson Silva to become the new UFC middleweight champion. Following that fight Silva said he was not interested in a rematch with Weidman. Later, at the post-fight press conference, a member of the media asked Munoz if he was disappointed about not being the man to dethrone Anderson Silva.

“I just want to say, if Anderson doesn’t fight Chris, I would love to step in. This was the real Mark Munoz tonight. When I fought Chris I actually had some adversity fighting him, so I would really love a rematch with him if he (Anderson Silva) doesn’t take it.”

It would be really interesting to see Munoz take on Weidman again and I think there is a high chance it will happen at some point in the future, but I also reckon Anderson Silva will take the rematch with Weidman after having some time to think things through following the loss on Saturday. However, that is just my opinion and to be honest anything could happen.

Munoz, who is now 35-years-old, is a great example of what can be done when you focus on your goals and dreams. He has been vocal about his emotional battles as a fighter and this has allowed people to see that anyone can take themselves from a low, straight back to an all time high. It was great to see Mark performing so well at UFC 162 and laying down what could easily be viewed as one of the best performances of his career so far.