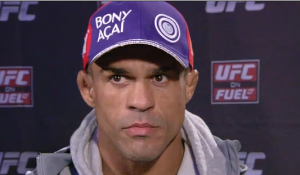 Following Friday’s scuffle between Vitor Belfort and Luke Rockhold at the UFC on FX 8 weigh-ins, Fuel TV’s Heidi Androl spoke with an emotional Belfort who said he thinks Rockhold is “scared” and “feels the heat.”

When asked how he felt about oddsmakers calling Rockhold the favorite, Belfort said that doesn’t bother him because, “I’m in God’s odds. I’m not in people’s odds. You doubt me, I prove you wrong.”

He continued, “God number one. He’s in my favor. No weapon formed against me shall prosper. You watch.”

Now there’s no need to get into a Theological debate. Can’t we just enjoy the fact a 36-year-old former UFC light heavyweight champion believes God is on his side in this fight? Why the Big Man forsook him in the Jon Jones and Anderson Silva fights we don’t know. Nor do we need to know…. mysterious ways and all that.

Now I’m gonna go Google “God’s UFC odds” to see if I can get a good line on this thing.