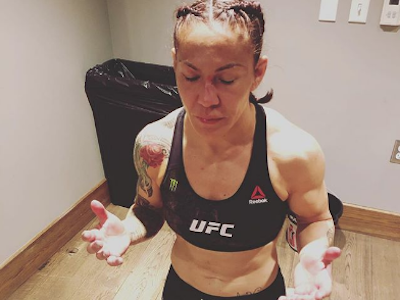 Cris Cyborg suffered her first loss at UFC 232 Saturday night since her MMA debut way back in 2005 in Brazil. She was the Strikeforce and Invicta FC featherweight champion prior to gaining the vacant UFC featherweight title against Tonya Evinger in July 2017. She then racked up dominant wins over Holly Holm and Yana … Read more

Now there’s no need to get into a Theological debate. Can’t we just enjoy the fact a 36-year-old former UFC light heavyweight champion believes God is on his side in this fight? Why the Big Man forsook him in the Jon Jones and Anderson Silva fights we don’t know. Nor do we need to know…. mysterious ways and all that.

Hello America, It’s Warhammer time once more folks, but before I get started I wanna give out a way you can reach me. The email is warhammernow@yahoo.com you can email me directly with questions or comments about whats going on in the world of MMA and I, the Warhammer, will address them as only I … Read more

MMA Fanhouse spoke with 10-0 undefeated Brett “The Grim” Rogers on the heels of the announcement that he will be fighting Fedor Emelianenko sometime this fall in a Strikeforce / M-1 Global co-promotion.

Whatever you may think of Rogers, one thing is certain. If he defeats Emelianenko, his life will change forever. “I’m God then. I’m the God of MMA. I’ll become the God of MMA, right? Isn’t that how it goes,” Rogers redundantly asked. “I’m the soul snatcher; I’m the Grim. I’ll take all his wins and put them under my belt, and then everybody can just hush up.”

Rogers has the drive to be number one. He has that drive to be the champion. He has purpose and that extra something that separates him from mediocrity. “There’s no other reason but to fight the best,” said Rogers. “I don’t fight for fun. I fight for the title; I fight for the money, and the respect. That’s me, and a lot of folks need to know that. I don’t care to just get in and have fun.”