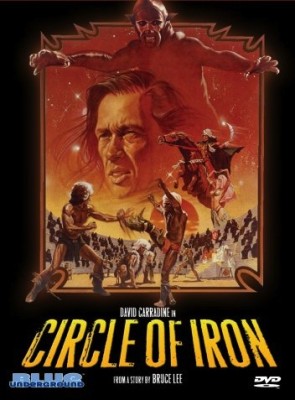 “Circle of Iron” is a 1978 martial arts film starring Kung Fu television star David Carradine and Jeff Cooper. It is not your “typical” martial arts movie if there is such a thing, and that is probably because it was originally written by Bruce Lee and his buddy James Coburn, along with Stirling Silliphant.

The film was originally titled “The Silent Flute” and Lee himself was going to play the lead role but passed away before completion. Silliphant and Stanley Mann completed the screen play after Lee’s death and Carradine was cast as the lead.

The action is not so great, the acting is often hokey and the fight scenes are certainly nothing compared to what Lee could have done himself. But even with that, there is a good message and deeper meaning in the work that shines through for those who have eyes to see it.

Like the blind master in the film who sees the truth beyond the surface, look past the Hollywood production and you will appreciate the message of Cord’s trials and his search for The Book of enlightenment guarded by Zetan.

This is a movie that certainly inspired me in my youth, not so much for the martial arts in it, although there are an interesting variety of Kung-Fu styles, but more for the philosophy and what is contained within The Book. Kick back, check it out and let me know what you think.

Amazon has a 2-DVD special release of Circle of Iron with tons of extras, including an interview with Carradine, commentary by director Richard Moore, trailers and TV spots, an alternate title sequence, and Lee’s original script with Coburn and Silliphant (accessible only via DVD-ROM).