Urijah Faber talks XFC 20, broken rib recovery and when he might return to UFC action 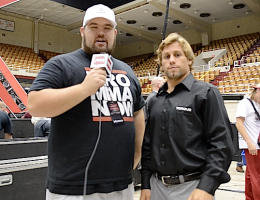 ProMMAnow.com’s Gary Thomas caught up with Faber following the fights to get his thoughts on the card and what he thinks about the XFC in general.

Faber brought us up to speed on how recovery is going from the broken rib he received in his last fight against Renan Barao at UFC 149 back in July. He also took an educated guess on when he might return to action in the UFC and if he sees more MMA commentating in his future.

3 thoughts on “Urijah Faber talks XFC 20, broken rib recovery and when he might return to UFC action”