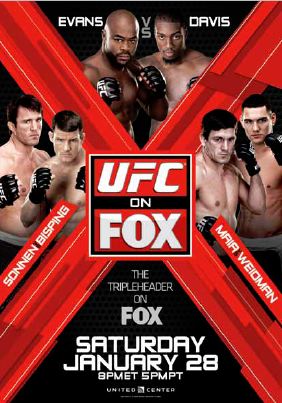 “UFC on Fox: Evans vs. Davis” (UFC on Fox 2) is officially sold out according to a Monday afternoon press release from the Ultimate Fighting Championship. The event, which is scheduled to take place this coming Saturday, Jan. 28, at the United Center in Chicago and broadcast live on Fox, is headlined by a light heavyweight match-up between former 205 pound champion Rashad Evans and undefeated former Penn State wrestler Phil Davis.

In the co-main event, middleweight contenders Chael Sonnen and Michael Bisping battle it out for a shot at current 185 pound champ Anderson Silva, and rounding out the Fox-televised portion of the card is a middleweight match-up between BJJ ace Demian Maia and hot prospect Chris Weidman.

“The fans in Chicago have wanted us to come back there for a long time and they proved why it’s a great sports town by selling out the United Center. Get ready Chicago! We’re bringing a night of fights that you won’t forget!”

UFC on Fox 2 will broadcast the three-fight main card live on Fox at 8 p.m. ET (5 p.m. PT), while the eight-fight preliminary card will broadcast live on Fuel TV starting at 5 p.m. ET (2 p.m. PT). And as always, ProMMAnow.com (www.prommanow.com) will provide LIVE results and play-by-play commentary from the first fight until the final bell right here on your home for all things mixed martial arts.

2 thoughts on “UFC on Fox 2 is officially sold out”