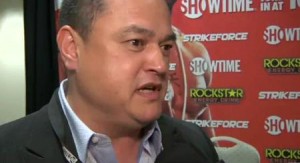 Strikeforce CEO Scott Coker talks about the “Strikeforce: Houston” event that took place Saturday night at the Toyota Center in Houston, Texas. Although Coker says he was not disappointed by the results of the fights, his demeanor says differently. Two of Strikeforce’s biggest stars, King Mo and Bobby Lashley were both defeated as well as the very marketable American war hero, Tim Kennedy.

Coker discusses each of the main card bouts, and says now we will see if Lashley truly wants to be a fighter or if he’s had enough. Coker talked about the future of KJ Noons and says he could either fight Gilbert Melendez for the title at 155 lbs. or Nick Diaz, for his title at 170 lbs. That’s a nice position to be in for Mr. Noons.

Coker also talks about former pro wrestling promoter, WWE personality and good friend of Brock Lesnar, Paul Heyman. It seems Heyman will be coming on board to work with Strikeforce in some capacity in the near future.