The Voice vs. Tito Ortiz *VIDEO* 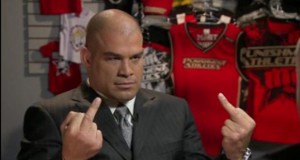 “The Huntington Beach Bad Boy” Tito Ortiz goes toe-to-toe with “The Voice” Michael Schiavello. Ortiz discusses his early days when he won the UFC light heavyweight title by defeating Wanderlei Silva. He talks about his fights with Chuck Liddell, his beef with Ken Shamrock, having to pull out of The Ultimate Fighter season 11 and his recent surgery.

Ortiz also touches on the incident earlier this year involving his girlfriend (and mother of his kids) Jenna Jameson, when he was accused of domestic violence. He also talks about the infamous Lee Murray incident that took place in London following UFC 38 in 2002 and denies he got knocked out. If you’re a Tito fan, kick back and spend about an hour with one of MMA’s living icons.