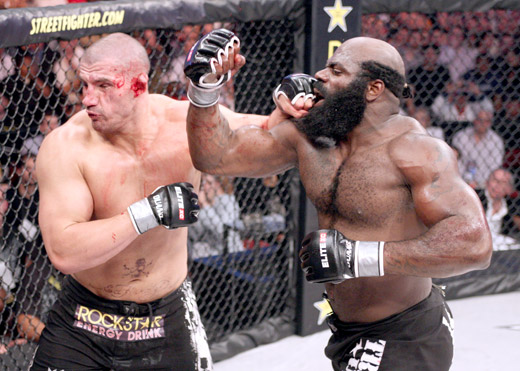 What do you think Saturday night did for Kimbo Slice? Did it help or hurt his career in mixed martial arts? It definitely gave him more exposure. I’m anxious to see what the numbers are on how many people tuned in, and stayed tuned in to watch the main event on Saturday night. Kimbo has only had three professional MMA fights including Thompson. Most of the already established MMA fan base did not think Slice “deserved” to be a main event.

However, it has been said that the Elite XC event on Saturday night was not really geared for the hardcore established fan base of MMA, instead it was more or less produced to attract new fans to the sport and to help CBS gain numbers in a slacking demographic for their network. That lagging demographic for CBS is males ages 18-34.

In that sense, I would say the Elite XC card was probably a success. I’m sure they met their target numbers for that demographic. But as a professional mixed martial arts event it barely passes. One of our readers said that within the world of mixed martial arts, the UFC is like the NFL and the Elite XC event was High-School Football and I think that sums up what we witnessed on Saturday Night perfectly.

Incidentally, if you really want to see what true professional mixed martial arts is supposed to look like, then tune in tonight to the VERSUS channel at 8pm CST to watch the WEC: Faber vs. Pulver event. The WEC is owned by Zuffa, which is the parent company of the UFC. I will guarantee you that if you were even mildly impressed by the “skills” you saw in the CBS show, you will be amazed at what you will witness tonight in the WEC if you tune in.

At the end of the second round last night in the main event, I said “He just got beat” after I saw Kimbo get put into a crucifix position and eat a numerous amount of elbows from James Thompson. I was really surprised Kimbo even made it back to his corner after that round. But to Kimbo’s credit he was able to come out for round three and start banging.

And even amidst all the criticisms and for all the negative press this event and Kimbo may receive, he still came out in round three and delivered some bombs. The guy still has some great boxing skill and he throws hard and he will hurt you and he knocked the shit out of James Thompson. It’s not Kimbo’s fault the ref stopped the fight a little early.

Kimbo said he was actually aiming for Thompson’s awful ear, saw it explode and wanted to hit it again. I think he would have knocked that ear clean off if the fight was not stopped. And I will say this, Kimbo is improving. He looked really good in round one and did much better on the ground than I expected. He had some great sprawls and great reversals against a very seasoned MMA fighter in James “The Colossus” Thompson.

One thing for sure; Kimbo has to work on his cardio. He is so big and muscular it takes a lot of oxygen to pump blood through that physique and by the end of round 2 his gas tank was almost empty. A main event professional MMA fighter just can not do that. It’s unacceptable in every sense of the word.

I just watched the fight again and something I missed during the hooplah of the main event stoppage was the commentator Gus Johnson say when the fight was stopped, “Terrible terrible stoppage. James Thompson was not ready to go down. Horrendous.”

Those are very strong statements from someone who was right at ringside. I will say it is pretty refreshing to have a commentating team who does not work for Elite XC but rather works for CBS and they called it like they saw it. Big props to Gus Johnson for being honest in his assessment of the fight.

So where does Kimbo go from here? Who will they match him up with next? He’s still not anywhere close to being ready for a top ten fighter and I hope they realize this and don’t try to go down that road yet. Kimbo knows he needs work and seems to be realistic about his skill level.

It’s Gary Shaw whose saying he could beat Mike Tyson and other outlandish things. At the post-fight press conference there was some disturbance when one of the other Elite XC heavyweights (Rogers) called out Kimbo in front of everyone and disrespected him by saying what he saw from Kimbo was pure shit. Kimbo’s entourage began to get heated but thankfully no fists were thrown.

Here’s some free advice Kimbo: lose the entourage. It wreaks of street-thuggery and it’s not needed in professional MMA. And if you keep insisting on having them with you at every press conference it could very well be your downfall. You can control your actions but you can’t always control what a posse does.

1 thought on “Kimbo Slice – What Happened? And Where Does He Go From Here?”