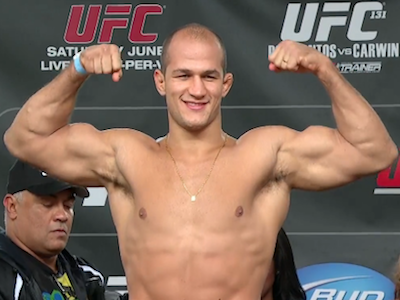 Former UFC heavyweight champion Junior Dos Santos didn’t have the best of nights on Saturday at Eagle FC 47. Near the beginning of the third round of his main event fight with Yorgan De Castro the action oddly came to a halt. Junior threw a strike with his right hand and it went limp almost immediately. De Castro noticed the sudden change and pointed it out to the referee which would bring a halt to the action.

It turns out it was a dislocation and Junior would release a statement about it on Instagram:

My shoulder is back into place. In this position like this, I’m not feeling any pain. I already talked to my doctor, we’re going to do some exams and figure out what’s going to be the procedures to get this thing better as soon as possible. But before going to bed, I would like to share with you guys that I was feeling so happy. I was feeling very good during the fight, like I haven’t felt in a long, long time.