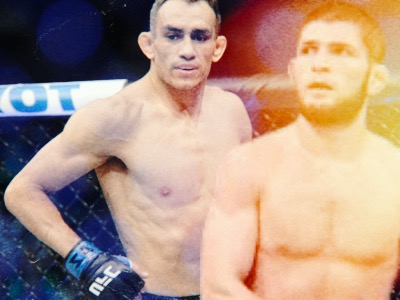 If the MMA gods decide to finally give us Tony Ferguson versus Khabib Nurmagomedov they have a lot of explaining to do. That potential lightweight clash will remain one of the UFC’s biggest missed opportunities.

Tony Ferguson is now on a four fight losing skid and coming off a scary knockout loss to Michael Chandler. Khabib Nurmagomedov retired undefeated as the UFC lightweight champion before riding off in to the sunset. A fight between Khabib and Tony was never to be because five times it fell apart for one reason or another. Ferguson was on a 12 fight win streak and looking invincible while Khabib was really starting to shine. That version of Ferguson would have likely been the biggest test of Nurmagomedov’s career. Sadly. the time for making that bout is long gone but that doesn’t mean the rivalry is over.

Tony recently threw out the idea of the pair coaching opposite each other on a season of The Ultimate Fighter reality show. Odds were that Khabib would have refused or ignored it but that turned out to not be true.

The Eagle FC MMA promotion owner gave us a glimmer of hope about the coaching role in an interview with ESPN (via GivemeSport).

I like this idea, honestly. I like this idea, we can do some stuff. Right now, not too many big stars in UFC right now. Myself, I’m finished, Jon Jones is not there, Henry Cejudo not there, Daniel Cormier not there, I don’t like this guy but he has big name – Conor not there. Adesanya, Volkanovski, of course Ngannou, and my brother, pound-for-pound king Kamaru Usman. Only a few people, you know.

If me and Tony are gonna be Ultimate Fighter coaches, I think they can create some good content, you know?

Dana, we have to finish business – Islam Makachev, and Ultimate Fighter. Please, call me back brother. If you don’t call me back, I’m gonna be in Vegas in June, then you have to send me location!

What do you think of this potential TUF season?