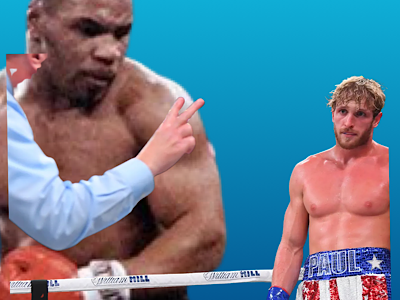 YouTube menace turned wannabe pro boxer Jake Paul seems to be the money fighter of his family. Despite being nicer and seemingly more intelligent, older brother and fellow wannabe pro boxer Logan isn’t getting the same attention as Jake. Logan last fought – and lost despite faring surprisingly well – against one of the all time greats, albeit over the hill, Floyd Mayweather Jr. Jake barely scraped out a questionable split decision over a 39 year old way past his prime Tyron Woodley in his last outing. The Paul brothers may be around for a while…buckle up kids.

While Jake is busy ducking his verbally agreed to rematch against Tyron Woodley to go fight Tommy Fury instead, Logan is aiming for something bigger. Someone bigger.

In February of next year we will likely see Logan step in to a boxing ring with former undisputed heavyweight champ and eater of worlds Mike Tyson. That’s right folks. A 26 year old YouTube guy who is an 0-2 pro boxer in Logan Paul is going to be fighting a 55 year old Mike Tyson. What the f…?

The news was met with a collective “wtf” and then a mild collective “meh”. No one is asking for this bout but if we had the chance to get paid Logan Paul money to fight a retired AARP member former boxing champ we wouldn’t turn it down either. Taking the KTFO for six figures sounds fine to the children’s college funds. There may be some who will reference Tyson’s age and physical deterioration as advantages for Logan. To those people I would like to ask what they are smoking. Logan is probably going to sleep.

One person certain that Logan Paul will be knocked out is former UFC middleweight champion Michael Bisping. Here is some of what he said via his YouTube Channel.

Logan, you know, he’s tall, you know, he’s long. He’s kind of a big guy, he’s athletic. He’s got a great physique. Jake Paul is by far the better boxer I would say. If I had to pick who was better then I’d say Jake Paul’s way better but Logan, you know, he has some skills. He can certainly punch and as I say, he’s big and he’s athletic and he’ll learn from the fight against Floyd. Maybe he’ll learn to manage his gas tank a little better. But there’s just no way I don’t see Mike Tyson going out there and absolutely flatlining him.

If Tyson isn’t hesitant in firing off a few bombs early then Michael will be correct. The longer that bout goes the more chance Logan has of landing a lucky punch. What am I doing with my life?