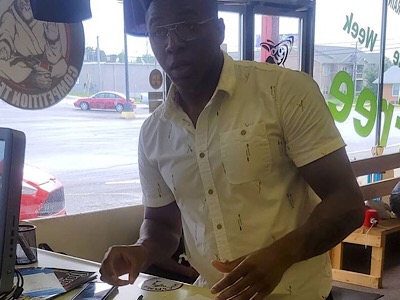 HRMMA light heavyweight champion Derik Overstreet has a hard time finding opponents. The amateur, yes amateur fighter is one of the latest athletes to sign with Sucker Punch Entertainment. To put that in perspective they have clients like Felice Herrig, Germain De Randamie, and UFC strawweight champion Rose Namajunas just to name a few.

Overstreet has an amateur record of 3-0 with his average fight time being 2:35 and all of them coming via TKO. He has had little to no trouble with the three men who squared off against him meaning opponents are hard to come by. Hopefully he has just solved that puzzle only handfuls of fighters have to face by signing with Sucker Punch.

Derik is legitimately a genetic anomaly. He has a tall frame and while he is lean he is deceptively muscular meaning that you don’t see the train coming until you are up close. In all seriousness we would be remiss not to mention that Overstreet has played collegiate football and it shows in his power and movement. Derik’s opponents have said to me backstage that he ‘hits like a truck’ and one of them said they were kicked when it was actually a punch.

Another challenge he is looking at is Kentucky’s decision to go against the grain with their new weight classes. Because he fights over 195 pounds he is now considered a heavyweight. The heavyweight limit is 225 so imagine telling other commissions that you are a heavyweight in Kentucky but not in other states.

Why Kentucky? Why did you do this to us?

While it is too early to start calling him the next big thing. He is on his way.