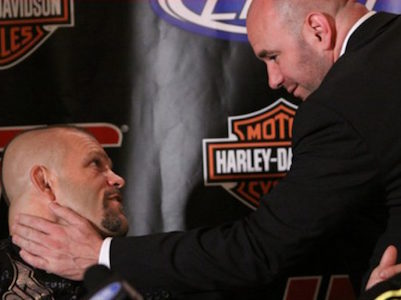 Dana White, for all intents and purposes, forced Chuck Liddell into retirement eight years ago and gave him a cushy job in the UFC until the new owners took over. White was looking out for his friend who had been showing signs of brain trauma after repeated knockout losses inside the octagon. White was disgusted by Liddell’s return to the cage this past weekend when he suffered a brutal first-round knockout loss to arch rival Tito Ortiz under the Golden Boy banner.

“I love Chuck Liddell and I don’t ever want to bad mouth Chuck Liddell,” White said on the “UFC Unfiltered” podcast on Tuesday.

“People even think I’m remotely bad mouthing Chuck Liddell, but the reality is — first of all, I heard last week the cokehead ‘Oscar De La Weirdo’ is talking sh*t that I don’t have any place to tell guys when to retire.”

“First of all, it’s called ‘friendship’ you f*cking cokehead.”

“I’ve been friends with Chuck Liddell for 20 years and the reality is that Chuck Liddell retired when he should have retired. Eight, nine years ago, however long it was. And, Chuck Liddell’s almost 50-years-old and has no business fighting anymore.”

“The fact that the state of California even let that fight happen is disgusting. Disgusting.”

Hopefully we’ve seen the last of “The Iceman” inside the cage and he can use his talents elsewhere helping build the next generation of mixed martial artists. He has nothing left to prove except that he’s smart enough to know when enough is enough.