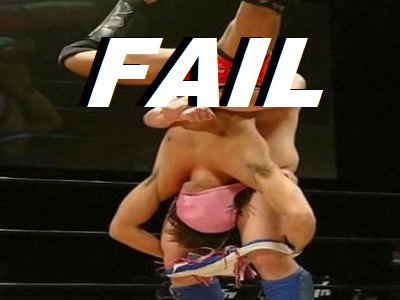 I love pro wrestling even though my editor Jack Bratcher still calls it ‘rasslin’. Ahem…Jack I’m looking at you. I occasionally watch Ring of Honor and New Japan when I can but I actively avoid the horrid product that WWE corporate is pumping out today. Rarely I will look up local and regional promotions to see if the next big thing is being developed and more often than not I see a crap fest. What really pushes a bingo hall event over the edge of terrible hurtling toward unforgivable is when a person steals a gimmick, or persona from a big name. Sometimes they go as far as to tell people they are the actual star they are impersonating. It’s disgusting and unethical.

Today I bring to you the most egregious examples of gimmick infringement in recent history.

Lee is on this list at number three simply because he has a half-endorsement from The REAL Nature Boy, Ric Flair. Yes I know that is somewhat hypocritical because Flair boosted the moniker from Nature Boy Buddy Rogers himself. That being said there is a difference here – Flair actually got the blessing from Rogers before he began strutting and shouting “WHOO”. Paul just took it and ran with it like he got caught shoplifting.

His voice impression of Ric may be the worst I have ever heard but in all honesty he does kind of look like an older Flair coming out in that ornate robe. That’s about it. I mean it’s just awful.

Dear God. Just…no. Other than his boots, shorts, badly mimicked mannerisms, move set, look, and name he hasn’t taken much from the original. That was sarcasm. Dave Batista oozes charisma and looks like a genetic freak who could tear you in half. Jay Batista looks like Dave’s uncle wrestling with muscle relaxers and a case of beer in his system. This is just bad.

The Ultimate Warrior was so unique and so freaking cool back in the 80’s. He had the intensity, the look, and a bad ass theme song. He would run to the ring and as a kid I was sure he was about to pull the ring ropes off when he shook them up and down so violently. His legacy and impact on the sport will live on for a long time to come. The first time I saw O.W.N. come running to the ring in his wrestling gear I was like, “what”. It was after the Ultimate Warrior passed away so I figured this was nothing more than a one night tribute. Man was I so wrong about that.

Not only does he use the One Warrior Nation creation in name but he has reportedly lied to some fans and told them that he was indeed the real Jim Hellwig, the man behind the face paint. It’s disgusting and shameless.