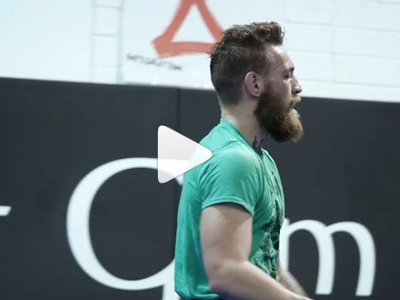 Former two-division UFC world champion Conor McGregor is in full tilt training mode for his upcoming championship UFC 229 bout against lightweight champ Khabib Nurmagomedov as the Irishman attempts to regain the belt he never lost on Saturday, Oct. 6. McGregor has to be ready for the dominant wrestling of Nurmagomedov who has used it to thwart every single opponent he’s faced so far in his career and it’s the main reason he has remained undefeated after 26 professional mixed martial arts fights.

Oddsmakers have Conor McGregor the underdog going into this fight at +155 and Khabib Nurmagomedov the UFC betting odds favorite at -165. It will be Conor’s powerful and unorthodox striking against the relentless grappling of the Russian powerhouse. From this new sparring footage released this week by Conor it appears he knows what to expect from Khabib and woe to those training partners who have to endure his punishment in preparation.

Neither fighter has done much in the way of promotion for the upcoming UFC 229 main event fight so it will be interesting to see just how many pay-per-view buys and how much attention this event will get. The first press conference for Khabib vs. McGregor was just announced today.