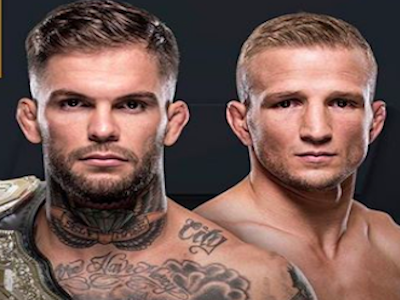 When Cody Garbrandt was bantamweight champion we heard talk of him dropping to the 125 pound limit to face flyweight champion Demetrious “Mighty Mouse” Johnson. It came from Dana White of course but others soon echoed the same rumors. During Monday’s media luncheon for his Saturday showdown at UFC 227 with current bantamweight champ TJ Dillashaw, Cody brought up the drop again but it had a condition with it – cash.

If they go out and compensate us, I’ll be more than willing to fight Mighty Mouse at 125 pounds. If they don’t want to pay us, I’ll stay at 135 pounds and clean out my division, and [Johnson] will keep doing what he’s doing. No ill words toward Mighty Mouse. I think he’s a great, great fighter. But they’ve got to compensate us for that. I think it’s going to be a great fight.

They didn’t make the TJ [vs] ‘DJ’ match because they wanted me to go down there and do it. That was my plan originally. TJ took that from me. He’s not original, but we’ll take care of him this Saturday.

I’ve got to go down a weight class, have a longer camp, invest money on the nutritional side and all that.

Do you want to see that DJ vs Cody bout? Even if Garbrandt isn’t champion when it goes down?