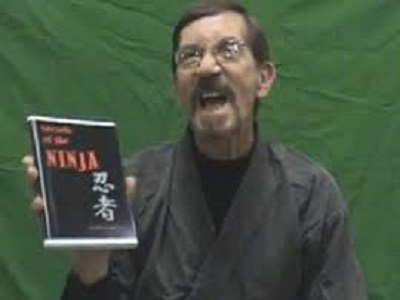 Back when ninjas took over the world in the 1980’s with films like Revenge of the Ninja, Enter the Ninja, Nine Deaths of the Ninja, and so on. Ninjas in cinema were awesome! They were near invisible, deadly with every weapon, and could wear neon costumes and still be totally bad ass. The truth is that ninjas were a live action role playing myth that grew over the years and possibly launched to mainstream when James Bond took on ninjas in You Only Live Twice back in 1967. They were mysterious and no one in America really knew what ninjitsu was. They do now and the ridiculousness of the whole thing is not lost on today’s MMA community. So, today I bring to you one of the worst of the worst. It’s not Count Dante, fraud Frank Dux, or even Sho Kosugi. Oh no. Today I bring to you Ashida Kim.

Ashida Kim sort of materialized out of thin air which is appropriate since he is half man, half mist he’s so invisible. He was also an unethical douche. At one point in his “career” he offered official black belt certificates for sending in a video, having it reviewed by the master himself, and if all is well – you get the official title of first degree black belt. One Bullshido site forum member sent in for one and got it for freaking Vale Tudo, a system that doesn’t have belts. When confronted, Kim karate chopped his keyboard in defiance and called the forum members involved poopy heads. It was comedy gold.

Kim also put out video tapes like all frauds. See my article on Bart Vale. He also became one of the best selling martial arts authors with titles like Ninja Dancing and Ninja Sex how could he not, right? Let’s take a look at some of the awesomeness he had for moron consumption. I did not make this compilation, but it serves its purpose.

This guy actually believes that this will work. He has been in his own world for so long surrounded by sycophants like Vale and it creates a culture that produces guys like George Dillman. Let’s look at the dangers of said sycophants. Meet George Dillman.

The point is that Kim is a victim of his own greed and years of lies turned in to truths in his head. He tried to capitalize on the popularity of ninjas and many people bought in to it because there weren’t any ninjas in the area like the McDojos that popped up in the late 1980’s and 90’s. I took a ninjitsu class at a kung fu school near me and we jumped off a trampoline and kicked for much of the first class and then threw throwing stars at dart boards. Next month’s lesson was to be climbing the side of the school with grappling hooks. Needless to say my parents put me in karate somewhere else. Kim was one of the first and worst to try and empty gullible wallets with less effective training than that.

The kicker to all of this is that Ashida Kim wasn’t his real name. Bullshido members refer to him as Hunter aka Davis. He is touted as a leader in the Black Dragon Fighting Society. The organization was headed up by fraud Count Dante aka John Timothy Keehan who had those “Most dangerous man alive” comic ads you saw in the 1980’s and 90’s. Already that should be a red flag. The problem was that Kim wasn’t really a member of the society and had his website suspended by the estate of Keehan. Ashida’s history is just a mess. His master Shindai(sp?) was so excellent at ninja stuff that he no one could find a trace of his existence.

The best part of Kim’s life has to have been the insanity of his infamous challenge. Kim’s $10,000 challenge was issued and it was comical because the opponent didn’t get $10K for winning. Kim’s challenger had to pay him $10K for the opportunity to fight him and also have a $25,000 appearance bond making it a grand total of $35,000 just to try and prove that Kim was not the tough guy he claimed to be. The challenger had a large number of limitations on his legal techniques while Kim was allowed to use any tools at his disposal. Bullshido users pooled up their money and challenged him and what was Kim’s response. He called them “ass wipes’ and deleted all of their comments. Using only his keyboard he vanquished his foes.

Kim preyed on many gullible readers, and there are still people who have invested so much money in his BS that still defend it so they don’t feel like fools. By doing so, I hate to say it, no I don’t, they are the biggest of fools.

Here is a fight reportedly of Ashida Kim vs Phil Temples that took place in South Africa. No one can 100% confirm that this is indeed Kim but one things is for sure that it looked extremely suspicious.