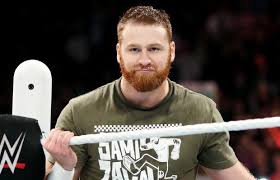 WWE has done a lot of stupid things in recent years – as Vince McMahon has gotten older and more stubborn. The whole Daniel Bryan fiasco is proof that WWE has no idea what fans want. He was incredibly popular, mainstream, adored by internet hardcore fans, and the WWE refused to give us what we desired.

They tried to force feed Batista and Randy Orton, HHH’s pals, down our throats and it backfired. It forced WWE to give us what we want at Wrestlemania 30.

Now, the stupidity has gone to the next level. Sami Zayn, an incredibly talented and popular superstar has lost a lot, like a lot of matches. The reason will make you so angry if you are a Zayn fan.

Sami is so popular and ready to carry the Intercontinental title legitimately that WWE creative, and Vincent Kennedy McMahon have decided it’s best for him to lose so fans get behind him like Daniel Bryan. CagesideSeats.com is reporting this and it’s just a rumor, but given the state of things in WWE and how out of touch they are with us it really is no surprise.

Reportedly, this is Vince’s idea. This isn’t some cockamamie hair brained scheme by HHH. No, this is the man in charge. This is the guy still mucking up our television shows and giving us Roman Reigns every week despite failing ratings. The man muting our boos and piping in cheers for Roman Reigns. To think they would intentionally sabotage an already popular wrestler sounds to me like, well… sabotage. They tried to bury Bryan, Ziggler, Ryder, Cesaro, Rusev, Swagger, and so many others when they got too popular so is it a stretch that someone wants Zayn to disappear under the guise of a “push” to the top. Making fans love him by making him lose?

Vince, retire. You are a certified, stubborn, old man who has no idea what we want anymore.