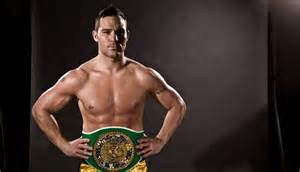 Pro boxer Ryan Coyne recently penned some friendly, or not so friendly advice to Ronda Rousey following her shocking KO loss to Holly Holm. Check it out.

An Open Letter to Ronda Rousey from a Professional Boxer

By “The Irish Outlaw” Ryan Coyne

Dana White’s latest effort to pluck a handpicked boxer and sacrifice him/her in the UFC Octagon just blew up in his face. Not only did it fail, but it also knocked off his cash cow. Double burn. This was not an EXCEEDINGLY past his prime James Toney holding training camp in Burger King being fed to the UFC Kracken, Randy Couture, to reinforce among the mixed martial arts masses what they already feverishly, perhaps falsely, believe. Any boxer given enough time to learn basic MMA principals of defense is going to take out a crude bully when dictating range, using lateral movement, and not getting sucked into an unnecessary grappling/wrestling/submission match.

Is boxing superior to MMA? No. Is MMA superior to boxing? No. They are just different. This argument is so tired, this post is almost not worth writing. It only deserves mention, because of Dana White’s attempts to answer the aforementioned question with “yes” as it pertains to MMA. He also knocked off his most bankable commodity in the process. Fitting for a smug fuck who boldly would have us believe Ronda Rousey could take out the best boxer on this planet (Floyd Mayweather) if it were to take place in the Octagon.

Watching Rousey get completely outclassed by Holly Holm at UFC 193 Saturday night, on her own turf no less, reminded me of things I’ve seen dozens of times in the gym over the years.

If you’ve ever been in a boxing gym, you know exactly what I’m talking about. A guy comes in jacked as hell with a shitty attitude, not unlike Rousey. He has countless number of brutal knockout victories on the street and all his friends concur… he hits REALLY HARD. Like Rousey, who seemingly had no interest in staying out of the danger zone by trying to pummel Holm, this guy has no interest in working on footwork, head movement, or any weak-ass shit like jumping rope. This guy is ready to spar.

Meanwhile…Every gym has a less-than-intimidating looking guy who can whip 99% of people on the block. He looks unassuming and steps through the ropes with Billy bad-ass, who is ready to drop bombs.

Billy is fired up as hell and huffing erratically with a crazed look in his eyes. He comes raging out of his corner and has no interest in touching gloves (like Rousey) because THIS IS A FIGHT! After loading up on monster shots, most of which miss, while the rest are so telegraphed and properly defended they do little if any damage. At this point, Billy begins to eat a multitude of straight shots to the head, body—really, everywhere, before getting thoroughly embarrassed.

Boxing isn’t about hitting hard, being an asshole, a bully, or being pissed off. Boxing is about being composed, relaxed, supremely conditioned, and picking your spots to transition from tactician to animal and back again. Holm’s beatdown reminded me every bit of this from the absolute disregard for Holm’s ability from the second the fight was made, to her stupid approach that she could just overwhelm a seasoned fighter like Holly, to her refusal to touch gloves before the bell rang.

I don’t wish any ill will toward Rousey, but she makes it easy to root against her. Like Tyson, the aura of invincibility is broken. Hopefully, unlike Tyson, she is not broken, can eat a little humble pie and rebound nicely. It would be good for her, and for the sport, but it’s not going happen with her current approach and demeanor. Unlike Billy who never came back to the gym, she can if she makes the proper adjustments.