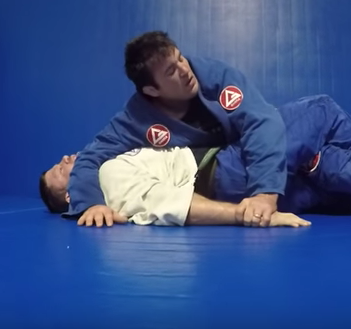 Dan “The Wolfman” Theodore is a hero of mine. He is dammit I don’t give a f*ck what you say. Show me someone who puts out more mixed martial arts technique videos than Wolfman. This guy has no big budget or crew following him around, yet he travels the world training with the best and filming all of it. And he’s been doing this for many years. A martial artist. That’s what I see. Always learning, this guy. In this recent clip shot a couple months ago in Oregon, Wolfman rolls with UFC legend Chael Sonnen, or “The Bad Guy” as he’s known among the seedy folk and their kin. Watch as Wolfman has early success after threatening with a guillotine, then taking side mount, using his gi as a weapon and controlling The Bad Guy. Wolfman goes for the leg though, that’s ballsy, but doesn’t get it and loses position. Chael is then able to take top control and from there, my man is heavy as molasses in Iceland.

Wolfman gave us a quote on this one:

Chael is super strong, with very strong hips and great mount keeping his legs tight and feet heeled in.

Not only is Wolfman a former pro MMA fighter and true martial artist trained in many disciplines, but he’s a stuntman, actor and Pancrase commentator on UFC Fight Pass. Stay close to PMN for more from Dan The Wolfman and his martial arts journey.