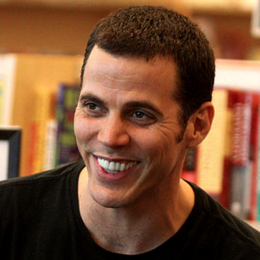 Jackass crazy man Steve-O was on Tuesday’s Joe Rogan Experience podcast talking about his rise to MTV and silver screen popularity and the path he traveled to get there and beyond. Like way beyond. Steve-O details many of his wild stories from stapling his ballsack to his leg (a regular gimmick of his) to giving himself brain damage from smashing beer cans on his head repeatedly for days at a time. He now only does it once or twice a week.

The Clown College graduate, real name Stephen Gilchrist Glover, age 41, has a hefty rap sheet as he’s gotten in trouble many times over the years doing wild stunts, most recently for an incident over his failed protest of Sea World which he’s soon headed to jail for. He talks about all of it.

Steve-O is sober now and has been for years. He talks about his intervention headed up by Johnny Knoxville and Dr. Drew. He does stand-up and stunts at comedy clubs around the country and has an upcoming Showtime special (Going to Jail Party) on Nov. 21 he’s shooting in Austin — and he inadvertently reveals he plans to set himself on fire at that show, and the venue owners, HBO, fire marshall, nor anyone else knew about it — til now!