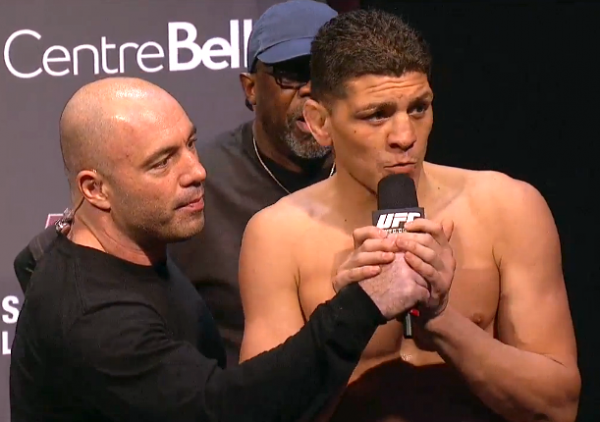 Social media was aghast at the ruling handed down yesterday by the Nevada State Athletic Commission (NSAC) against Nick Diaz for failing a drug test for marijuana back in January. The commission considered a lifetime ban for Diaz who is coming off a decision loss to Anderson Silva at UFC 183 (the loss was overturned to a NC after Silva popped for steroids). The NSAC panel was divided on sentencing but ultimately went with a five-year suspension and $165,000 fine for the 32-year-old Stockton fighter. He will be 36-years-old when he’s allowed to return to fighting.

UFC color commentator Joe Rogan expressed his disgust with the NSAC this morning on Twitter, saying what many are feeling.

NSAC suspending Nick Diaz for 5 years for pot is an irresponsible abuse of power. It's callous, idiotic and sickening.

Unless there's scientific proof that marijuana is a performance enhancing drug that gives an unfair advantage it should not be restricted.

Rogan is probably right in saying marijuana shouldn’t be restricted until there’s scientific proof. But the commission is following the WADA (World Anti-Doping Agency) protocols and marijuana is among the substances that are banned. It’s not as if the commission has a gripe against marijuana, and it was because certain of the commissioners felt a lifetime ban for marijuana was too harsh that Nick Diaz did not get a life suspension from fighting in MMA.

The main reason for the NSAC’s punishment was to send a message. This was Diaz’s third time before them for the same offense. His first offense occurred in 2007 at Pride 33 when he fought Takanori Gomi. He tested positive for marijuana again in 2012 when he fought Carlos Condit at UFC 143.

It is the harshest punishment the Nevada Athletic Commission has ever handed down and it doesn’t seem fair that fighters who’ve been busted for steroids or cocaine have gotten lesser punishment, but Diaz’s disregard for the rules and his “I plead the fifth” defense did nothing to convince the NSAC he was contrite or respected their role as a governing body for professional MMA. The NSAC wants to flex its muscle and pot gets a bad rap, but as usual there’s a little more to it on both sides.