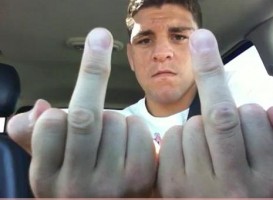 The fallout from Nick Diaz’s five-year suspension and hefty fine levied by the Nevada State Athletic Commission continues. In an interview with MMA Fighting following Monday’s hearing, Diaz opened up about his past and told the story of how not long before his first fight his girlfriend had committed suicide and he would run seven miles to her grave everyday to promise her he was going to make it as a fighter.

And he has. Sort of. As far as talent, there are few on his level. His ability to entertain in and out of the cage are skills he should have been paid more for. A talent like Nick Diaz this long in the sport should be able to retire comfortably, but he didn’t like to “play ball” as Dana White used to put it.

Guess who does like to play ball, and he knocks it out the park? Conor McGregor. Diaz realizes he has paved the way for guys like Conor.

‘Guys like Conor, who are gonna make more money than me can see how to do it, as well as negotiate what they want in their contract using a team and agency and lawyers instead of their crooked jiu-jitsu trainer and coach, who was my manager for the majority of my career except for my last fight when I found the right agency on my own and signed with them, and I didn’t even graduate the motherfucking eighth grade.’

The reference Diaz makes to his “crooked jiu-jitsu trainer and coach” is an interesting footnote here. We’ve heard some grumblings in the past from that camp, but nothing as blatant as this.