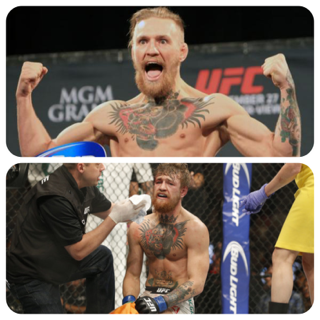 I’m going to pick a sport event to accurately describe the mind of a hater: #‎UFC189‬ Conor McGregor vs. Chad Mendes.

UFC fans are all used to the super loud, ultra confident, borderline cocky Conor McGregor. For those who don’t know, McGregor is an individual who doesn’t follow the rules. He’s an amazing mixed martial arts (MMA) athlete who speaks his mind without filters, and, let’s just say, political correctness is not one of his strengths.

However, this past weekend we had the chance to see a glimpse of a different, more human Conor. After his spectacular win over Chad Mendes, he dropped down to his knees and allowed his humanity to come out.

To all of Conor’s haters, of which there are plenty, you don’t hate the real Conor. What you actually hate is his ability to move forward in the face of his own fears and doubts. You hate him because he’s just like you and me. You hate him because after spending so much of your time and effort listening to the negative voices in your head, Conor rose up and proved you wrong.  Everything IS possible. You hate him because you hate yourself. The difference between Conor and you is that he takes pride in all of himself: the good, the bad and the ugly.  The guy’s got balls… and a potty mouth.

You hate him because he is an unusual human being that chose to believe in himself more than you do about yours.  You hate Conor because after you look at this picture of him crying, you realize that he’s not a superman or some emotionless killing machine. What you wanted to see was the guy you’re used to hating. We all have different sides to us. The difference between Conor and most of us is that he embraces all of himself.

Success AND failure tend to bring the best and the worst out of us, and that might be the only way you get to see real sides of people. The masses envy and hate successful people just because they represent our true potential. We’re always putting “success” on the pedestal. We spend endless amounts of time building unrealistic images in our heads of what success looks like. We call the means to success “luck”. We label successful people “geniuses” and see ourselves as “unfortunate.”

To our disappointment, yes, our disappointment, with Conor’s help, we come to realize that success isn’t impossible. Conor represents everything we’re afraid of: that we actually DO have the ability to accomplish whatever we want. So now we envy and even hate the Conor McGregors of the world, because they remind us of everything we could have been or done.

You (the MMA fan) hate Conor McGregor because he loves his dreams more than your opinions. You have this hatred because Conor has something most of us only dream of having. And that is SELF BELIEF.

Conor McGregor, thank you for BELIEVING in your dreams. You are an inspiration to all of us.

Leo Frincu came to the United States from Communist Romania with $10, a backpack and four words of English. Now, he’s a businessman, renowned trainer and mentor for UFC women’s bantamweight champion Ronda Rousey. Among his many athletic accomplishments, Leo is a six-time Romanian wrestling champion, four-time European champion and was also trainer and coach for the 2003 U.S. Olympic Wrestling Team. Leo is the author of the book “Choosing Freedom”, which details the steps he took to leave the oppressive Romanian society through wrestling and how his experiences have helped him in the United States – going from a bus boy to successful entrepreneur. You can learn more about Leo Frincu on his website www.LeoFrincu.com. Also, follow Leo on Twitter @leofrincu and “LIKE” his page on Facebook.

Be sure to check out Leo’s book: High Performance Mentality