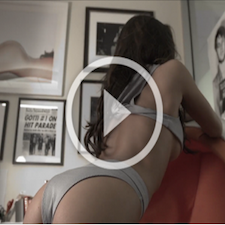 Go behind-the-scenes of a new Playboy photo shoot with UFC Octagon girl Arianny Celeste. This isn’t the first time we’ve seen the brunette bombshell in Playboy and odds are it won’t be the last — unless she decides to actually come to blows with UFC rival Ronda Rousey, the reigning women’s bantamweight champion, whom she has had an ongoing beef with for some time.