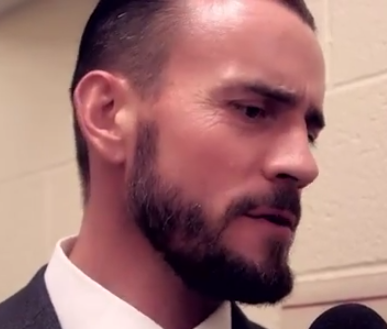 Former WWE superstar CM Punk has only been training mixed martial arts under the guidance of Duke Roufus for two months, but everyone wants to know when the straight-edge Chicago native will make his Octagon debut. Reports from his camp on his progression are good and he has some great fighters to spar and work with at Roufusport in Milwaukee where he makes the 90 minute commute usually five days a week.

Punk had some BJJ and karate experience, but no MMA experience coming in. But he is very athletic and fit and lives a clean lifestyle. And anyone like himself who performed full time under the grueling WWE schedule knows what it’s like to grind, take bumps and keep in shape. Combine that with a fighting mentality and a willingness to be molded, Punk might do some damage in the Octagon although he probably won’t enjoy the same level of success Brock Lesnar did by winning the title.

Punk tells Milwaukee Fox affiliate when he wants to take his first fight:

“In my mind, I’m shooting for the end of the year (to make my UFC debut). So, October at the earliest, December the latest. If they tell me I’m a whiz kid after six months and they think I’m ready; it might be earlier and it might be later, I don’t know. I know that’s a very vague answer, but I’m taking this extremely seriously. … Yeah, and I just want to be as prepared as I possibly can be, but also there will come a time when you just have to . . . you can train and train and train and train, but eventually you just have to fight. You can hit mitts all day, but eventually you have to spar.”

Punk also discussed his time with the WWE and what he missed about it (Paul Heyman). He also said there was zero chance he’d ever return. He seems to have put that life behind him and no longer even watches pro wrestling unless his wife AJ Lee, former WWE Divas Champion is wrestling:

“None. I don’t watch wrestling anymore. I’ve tried to, but I have an aversion to it. You do something like that for however many years I did it, and it’s like a lifetime. I’ve seen enough. … I will, yeah, I will watch her [AJ Lee’s] stuff. Chances are she’ll only tell me to watch when she’s excited about something. But, yeah, it’s my wife, she’s a grown-ass woman, she can do what she needs to.”

Punk covered a lot more in his interview with Fox which you can read in full here.

This guy breaks it down too: