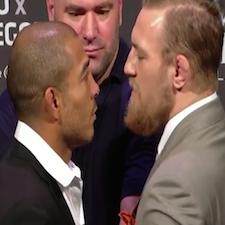 As part of the UFC’s World Tour Press Conference for UFC 189 Featherweight champion Jose Aldo and Irish slugger Conor McGregor came face-to-face for the first time this week in Brazil. McGregor goaded the champion saying, “I own this town. I own Rio de Janeiro. And for him to say he’s the king and I’m the joker, if this was a different time I would invade his favela on horseback and kill anyone that was not fit to work. But we’re in a new time, so I’ll whip his ass in July.”

Strong words from the Irishman. All the fans in Rio were booing him but that is what he wants. He’s eating it up and making them care. McGregor will be laughing all the way to the bank, especially if he actually defeats Aldo when they face of in the UFC 189 headliner on July 11 in Las Vegas. Crazier things have happened.

Women’s bantamweight champ Ronda Rousey and Four Horsewomen slayer Bethe Correia also faced off for the first time as they announced their championship bout for the UFC 190 main event on August 1 in Rio. “Bethe is going to have her own come to Jesus meeting in Brazil,” said Rousey. “I’ll come right down here. I promised the Brazilian fans I would do whatever I could to come down here and fight. I meant my promise and I’m happy to come down here and entertain you guys while I discipline this girl.”