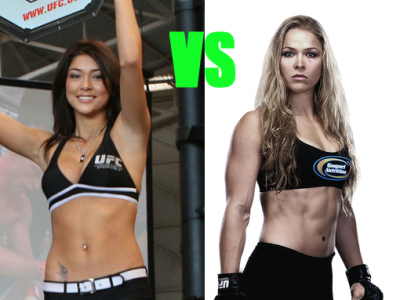 Ronda Rousey may not give a damn about her bad reputation but longtime UFC Octagon girl Arianny Celeste doesn’t feel the UFC women’s bantamweight champion and Olympic medalist is a good role model for women.

Talking with MMA Junkie Radio this past week ahead of UFC 170, Celeste was asked if she was a fan of Rousey and likes the way she carries herself. Celeste responded:

“I’ve personally been talked about by her and I don’t even know her. I’ve met her twice, but she’s said a couple things, like in her Maxim interview I guess, a couple people pointed out to me, but I didn’t really acknowledge it. But I don’t really like the way she carries herself. I don’t think she’s a good role model for women. I think that women should empower each other and, you know, give each other a little pat on the back, you know. She’s paving the way for women’s MMA and I’ve made being a UFC Octagon girl into a career, so she should definitely recognize that and be nice.”

So what did Ronda say exactly in that 2012 Maxim interview? Rousey was ranked number 29 for the Maxim Hot 100 (sexiest women in the world) — Arianny was voted number 18 — and Rousey was asked if there were any women ranked above her on the list she felt didn’t deserve it.

Rousey answered, “It would have been really funny if I’d beaten [UFC Octagon Girl] Arianny Celeste, because that would be like a triathlete coming along and beating the runners in a marathon. Like, ‘Ha-ha, it’s your job to show your titties—I do that better than you!’ Maybe next year. She’s only getting older, and I’m reaching my prime.”

For a self-proclaimed “girly girl” Celeste doesn’t appear to be scared of Rousey. Wonder if UFC officials will have any problem with the veteran ring girl publicly criticizing their biggest superstar? What do you think, is Rousey a good role model for women — what about Celeste?
[ads1]
[ads2]