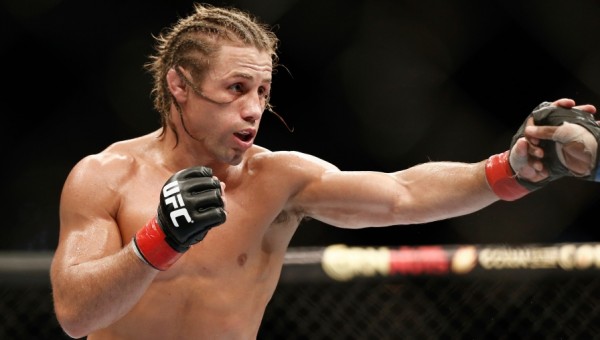 Urijah Faber was such a favorite in his UFC 181 match up with Francisco Rivera that you couldn’t even bet on the fight in Las Vegas. Someone forgot to tell Cisco.

The first round was all Rivera as he was able to stuff Faber’s takedown attempts and land some good shots. The pace was fast but it was going all in favor of Rivera. Rivera finished the first five minutes with a defended takedown and then some snappy combinations.

Faber came out strong in the second but what swayed the fight was an accidental eye poke that went unnoticed by the referee. Faber got both eyes of Rivera before getting him against the fence and going on to submit Rivera.

Faber told Joe Rogan that it sucked for Rivera but he didn’t know that he had got into the eyes until he saw the replay.

Another win in the historic career of Urijah Faber and an unfortunate loss for Rivera. It was Faber’s 17th submission win.

More to come as the UFC 181 pay per view is about to kick off. All of your results and commentary can be found right here.