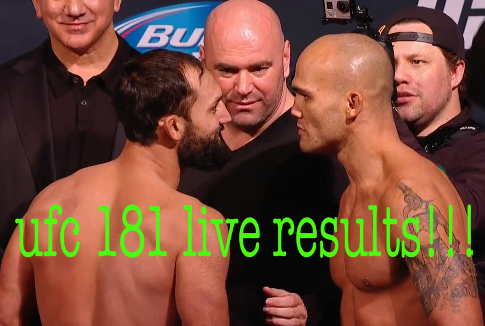 UFC 181 takes place this evening from Mandalay Bay Events Center in Las Vegas. The event is headlined with two title bouts, including a rematch between welterweight champ Johny Hendricks and No. 1 contender Robbie Lawler, as well as a lightweight title bout between champion Anthony Pettis and former Strikeforce 155-pound champ Gilbert Melendez.

The card also includes several other intriguing fights, including a pair of heavyweight match-ups between Travis Browne vs. Brendan Schaub, and Todd Duffee vs. Anthony Hamilton.

PMN (www.prommanow.com) will provide live results and round-by-round updates of all the action for you right here.

Be sure to check out our UFC 181 staff picks to see our predictions for tonight’s fights. Also, visit our UFC Streams page for a live feed of the post-fight press conference immediately following the event.

Refresh your page for live updates.

Round 1 – Fairly close and active round with both up-and-comers landing some decent strikes. I’d give the edge to Collard 10-9.

Round 2 – Collard hurts White with a left hook, takes his back but Alex escapes and goes for a footlock. Collard gets free but back on the feet White lands a big knee from the clinch. … Collard nearly submits White after pulling guard and locking up a triangle but he survives. Another round for Collard 10-9.

Round 3 – White bloodies Collard up and gets a takedown before the bell. 10-9 White, but PMN scores the fight 29-28 for Collard.

Round 1 – Hobar dropped Pettis with a left hook early, then got a takedown. Pettis landed a good head kick during the round, but was on his back for quite a bit. 10-9 Hobar.

Round 2 – Pettis getting the better of the striking exchanges now, lands some good head kicks. Hobar gets another takedown but Pettis almost locks up an armbar. 10-9 Pettis.

Round 3 – Hobar kept coming at him but Pettis got the better of the standup. Hobar couldn’t get it back to the ground. 10-9 Pettis. PMN scores the fight 29-28 Pettis.

Most honest post-fight interview. Pettis said he’s still trying to find himself as a person and mixed martial artist. We don’t normally have it all figured out at 21 do we.

Round 1 – Pennington bloodied up after taking a knee from Evans-Smith. Lots of clinch fighting, with Evans-Smith controlling much of it, and landing some good knees. Pennington did score a takedown with a knee on the way up, then locked up a bulldog choke a choked Evans-Smith unconscious as the bell sounds. The image was quite surreal of a bloodied Pennington face down going out as they cut to commercial. For the uninitiated she might look dead.

Round 1 – Jones has a massive amount of chest hair but it didn’t prevent Anderson going for the takedown and getting his face buried in it as Jones attempted a guillotine. Twice. Anderson lands a couple big punches then puts Jones on his back but he gets up before the bell. 10-9 Anderson.

Round 2 – Anderson pretty much dominated the round with his wrestling. 10-9.

Round 3 – Anderson dominates with his wrestling. 10-9. PMN scores the fight unanimously for Anderson.

Round 1 – A wild scramble ends with Gordon taking a low blow and a timeout. He scores a takedown right away as they resume. Samman trying to hold him close from full guard thus preventing Gordon from getting anything going. Ref Herb Dean stands them up. Samman using kicks while Gordon throwing bombs. Gordon with another takedown. Gordon drops a few elbows from half guard, but Samman recovers full guard and stifles him the remainder of the round. 10-9 Gordon.

Round 2 – Front kick to the face and a leg sweep from Samman, he goes for Gordon’s back but ends up on bottom yet again. Samman locks up full guard and the action is stifled. The crowd disapproves. Ref stands them up again. Samman knocks him out cold with a head kick for the win. Crazy!

Round 1 – Cisco outstriking Faber in round one, and preventing the takedown. 10-9 for Cisco.

Round 2 – Faber hurts Cisco with an unintentional finger in the eye after faking a takedown and Cisco goes down. Ref missed it and Faber locks on a choke for the tap. Very unfortunate as Cisco was winning. Instant replay would solve this shit.

Round 2 – Huge leg kick from Ferguson after setting it up with his hands. Forces the shot from Trujillo and Ferguson takes his back, goes for a kimura. Trujillo escapes and they are back to the feet. Ferguson drags him down, riding his back, knee to the ribs. Trujillo back up and pulls Fergson down. But he’s right up and pressing forward again. Front kick. Front headlock, snaps Trujillo to his knees. Ferguson riding his back again. One hook in, locks up the choke and Trujillo taps out.

Round 1 – Todd Duffee lands a big right hand to the temple early. Hamilton goes down and Duffee finishes him. Domination.

Round 1 – Browne catches a kick and puts him down, but he’s right back up. Clinch and knee from Browne, tosses Schaub down. Back up… Schaub putting out a double jab. Jab from Browne snaps Schaub’s head back. Schaub shoots in and puts Browne on his butt. He gets up, Schuab drags him back down, but he’s back up and Schaub’s pressing him to the cage. Overhand right from Schaub to break the Thai clinch from Browne. Browne hurts and drops Schaub with a big uppercut. Browne takes top control, now full mount. He lands some big shots from the top until Schaub gives up his back. Browne flattens him out and is landing shots to the sides of the head. Ref wants Schaub to do something. 10 seconds… ref stops it. DOMINATION.

Round 1 – Melendez pressing with strikes, goes for the takedown after taking a leg kick. Pettis defends the takedown, but Melendez stays on him and briefly gets him on his butt. Melendez has him tied up against the cage with one hook in. Pettis breaks free, lands a jab. Melendez pressuring with punches and gets another takedown. Pettis gets up, goes for a high kick and spin kick to the body. They exchange shots after Pettis stuffs a takedown. Flying knee from Pettis. Melendez backs him to the cage with punches, looking for the double leg. Body kick from Pettis, and another before the bell. PMN scores it 10-9 Melendez.

Round 2 – Melendez backs Pettis to the cage with punches. His corner doesn’t want him to chase Pettis, but he’s landing some good body shots. Pettis with a front kick to the face, then Pettis cracks him with a counter right hand that forces the shot from Melendez, and Pettis locks up a guillotine and becomes the first person to stop Gilbert Melendez as he taps out.

Round 2 – Head kick scores for Lawler, but Hendricks is picking his legs apart. Lawler with a calf kick. Elbow from Lawler. Right hook. Nice punch combo, leg kick from Hendricks. Striking looks much improved. He presses Lawler to the cage after backing him up with a double jab. Hendricks looking for the double leg, and scoops him to the ground.  Coach Marc Laimon screams, “Take his heart,” from Hendricks’ corner. Lawler is able to finally get to his feet and lands a front kick to Hendricks’ face. Right hook and a couple leg kicks from Hendricks. Lawler fires back in a nice punch exchange. Lawler lands a big body kick and Hendricks goes for a guillotine at the bell. Hard to believe Hendricks withstood that front kick to the face. It was nasty. PMN scores the round 10-9 Hendricks.

Round 4 – Hendricks teeing off with punches as Lawler seems distracted from the threat of a takedown. Hendricks looking for the double leg against the cage. Ref separates them. Hendricks back to teeing off again with strikes. Lawler lands a nice head kick and shows he’s still here. Hendricks staying a lot busier here though. Lawler still throwing some heat. Hendricks’ jab and footwork making a big difference here. Another head kick from Lawler. Hendricks with another takedown. His fifth. Lawler back up and in his face with punches. Hendricks counters and shoots in for the double. Lawler defends as Hendricks hangs onto a single from his knees. Hard elbows and punches from Lawler. Hendricks seems unfazed as he stands up at the bell. PMN scores the round 10-9 for Hendricks.

Round 5 – Hendricks back at the legs after a couple punches. Crowd wants the slugfest. Ref too. He separates them. Couple body kicks from Lawler. Body kick from Hendricks. Lawler lands a nice punch combo as Hendricks tries taking a little breather. He shoots for Lawler’s legs as they crowd boos. Ref breaks them up again. Hendricks shoots in again and the crowd hates it. Ref warning him again. Hendricks on his knee grabbing a single. Lawler hammering him with shots to the head and body. With 20 seconds left Lawler is all over him, back on the feet and he’s throwing everything at Hendricks. We need another round! PMN scores the round 10-9 for Lawler, but the fight for Hendricks 4 rounds to 1. Hendricks didn’t make any fans in this one.

One thought on “‘UFC 181: Hendricks vs. Lawler 2’ live results and round-by-round updates”