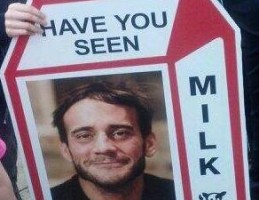 The average McDonald’s worker makes in 4 months what their CEO makes in an hour. Scary. Now on to the WWE.

Earlier this year the WWE salaries were reportedly leaked and there are some real surprises. Let’s take a look at the Big Show who works a limited amount of dates shall we. Show makes a cool 1,000,000 a year with his own personal tour bus. Flying is a tough deal for him due to size and paying for two seats I would guess. Now let’s compare that with a much less likable and marketable wrestler in the great Khali. Show is a fan favorite for the most part and makes them boo when he’s a bad guy – like a guy getting paid 1M a year should. Khali gets $974,000 to suck at everything, get booed because he is awful, and to stink up our TV sets. Comparing that to a top 5 worker like Dolph Ziggler who makes $540,000, I am guessing you want to vomit.

Imagine those compared to UFC contracts. What if the WWE awarded match of the night bonuses and Ziggler got that 50K extra a PPV? Dolph would net a cool $600,000 extra and that would give guys like Darren Young, who makes a dismal $80K a year getting decimated in under 5 minutes, an incentive to not suck. But, since some matches aren’t given the proper time to build due to scripting, and Darren Young gets squashed alot that probably wouldn’t work. All of the mid-card to main eventers would have the only shot.

Most WWE developmental contracts are said to be in the abysmal $24,000 to $25,000 per year range, with two or three year commitments. There may be exceptions if a talent has a strong name or if the company thinks they are a top prospect. 2-3 year commitments, let that sink in. No matter how much you rise above the others on NXT there is no hope for more money. Unless you have a name like the newly signed Kenta there are no exceptions.

Michael Cole and Jerry Lawler, the voices of the WWE, make just $100,000 roughly a year. I swore those guys would make more because they are who the WWE banks on to make the matches sound credible and exciting. Matt Bloom aka Tensai makes 500K a year and he doesn’t even wrestle anymore. Think about that one for a moment. Granted, the commentating sucks but you would have thought at least $200,000 a piece. Matt Striker who has been with the WWE far less than both of them tops the pair with his $112,000 a year.

Potentially the absolute biggest shock of all is Jack Swagger. He is in one of the hottest feuds of the year with Rusev and makes 72K. That is completely ridiculous. He is a former World Champion and makes less than Darren Young.  Absolutely shameful.

Legends contracts like the ones for guys like Shawn Michaels and Booker T are a way for WWE to keep them around and prevent them from helping a potential competitor with their star power. Booker makes $72, 520 a year with first class travel guaranteed and all he does is lend his raspy voice to a pre-show usually.

Below is apparently a full listing of what wrestlers make a year. What do you think of the pay differences. Don’t overlook the fact that John Cena gets over 6% of total merchandise sales and his stuff sells more than 5 times what the #2 guy does. He makes almost a million guaranteed on wrestling sales alone we figure.

NOTE: Some wrestlers like CM Punk are no longer being paid by the company. These figures were leaked around February of this year.