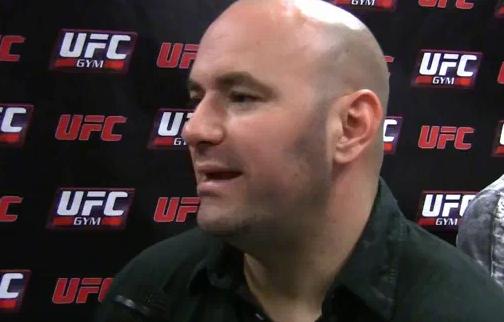 In the wake of the Ray Rice situation in which he knocked out his fiancee (now his wife), FOX Sports had UFC President Dana White on Wednesday night to talk about the promotion’s own stance on domestic violence and why they allowed Thiago Silva to return. Because Silva’s wife left the country, did not testify and all charges were dropped, the UFC saw fit to bring Silva back.

The UFC has forgiven athletes for a lot of things over the years and have allowed them to come back and continue to fight. But UFC President Dana White says there is one thing that will get you banned for life, you “don’t bounce back from putting your hands on a woman”.

Because the NFL originally only gave Ray Rice a two-game suspension, and it wasn’t until the complete video was made public did they release him indefinitely, White was asked if he thought NFL commissioner Roger Goodell should resign.

“If Roger Goodell saw that video, knew that’s what happened, knew that Ray Rice did that to his wife, or his fiancee or whatever it is, he should just get up and leave on his own.”

Are you in agreement with the UFC prez about Goodell? And do you think the Thiago Silva situation is different? What about what happened with Anthony Johnson a few years ago?

1 thought on “Dana White on Ray Rice situation: NFL commissioner Roger Goodell should resign if he knew what happened”