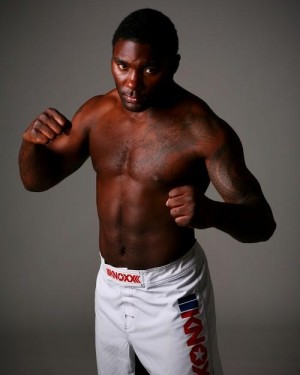 On Aug. 2, UFC welterweight fighter Anthony Johnson was sentenced by an Alameda County, Calif. judge to three years probation, eight hours community service at a local boy’s club, one day of jail and 52 weeks of domestic violence counseling spread out over the three-year period.

Johnson is scheduled to re-appear in front of the judge on Sept. 7 to determine any restitution for court costs, provide proof of domestic violence counseling and the community service.

Johnson spoke to Percy Crawford over at FightHype.com about the incident to “set the record straight” and is not happy with the media’s handling of the situation.

“I heard MMA Weekly had hit up my agent and I guess they so bored with they life, they wanna go and dig up somebody’s case that’s already settled. And I heard that MMA.tv is corny enough to go and dig up somebody’s case for no damn reason really, like it’s their business. They just bored as hell but it’s all good. – They can say whatever they want to say and put it out there ever how they want. I know the truth and I know the media and shit gonna try to twist it up. I don’t care, but don’t try to make me look like a bad dude whenever I ain’t did nothing. If they are that bored with their life where they gotta dig up my stuff, then more power to them.”

The MMA Weekly article seems fairly straightforward and basically just states the facts of the case and sentencing. Obviously, no one wants their dirty laundry aired in public. It sucks and it’s unfortunate, but it is part of the price celebrities and UFC fighters pay.

Johnson goes on to make a comment  about websites printing the most negative thing they can find about someone in order to get traffic to their site.

“I’m not going to say it how they want me to say it because they just want to find the most negative thing they can find out about somebody. It ain’t even negative towards me because its not true, but don’t be out there trying to put my business in the street whenever nothing is going on. They doing it just to get hits on their website, and if you are that corny then go ahead. If that’s all you got to do in your day is to find BS on people, then do what you do. Somebody gonna get you if it ain’t me.”

There are tabloids that make their money by printing outrageous and negative stories about people. Everyone knows that, but this hardly falls into that category. Once again, all that was done, is someone reported on a UFC fighter’s sentencing. Like it or not, that is news.

It is likely the MMA media in general would just as quickly and extensively report on it, probably even more so, if Johnson had beaten Josh Koscheck at UFC 106 in February of last year.

Just think if he had knocked out or choked out Koscheck in that fight, then maybe it would have been him we all would be watching as St-Pierre’s opposing coach on The Ultimate Fighter season 12.

That’s the kind of news everyone would just as soon be printing. It’s seriously doubtful anyone (at least in the MMA media) relishes writing or publishing a story about another UFC fighter getting arrested, going to jail or being sentenced. (Now War Machine going to jail, that’s a different story… I kid, I kid).

Finally, Johnson’s statement “Somebody gonna get you if it ain’t me” seems to be a warning of sorts to those who would dig up and print dirt about the fighter. This is what is commonly known as pre-meditation, and it definitely won’t help his case if something does go down.

For the record, Johnson has always insisted he was innocent of the domestic violence charges. On July 9, 2009, MMA Agents released the following statement regarding their client, Anthony Johnson:

“It has come to light that an email is being circulated with false and misleading information pertaining to Mr. Anthony Johnson. On behalf of Mr. Johnson we would like to address this issue. On June 27th Mr. Johnson was arrested in Hayward California and was charged with misdemeanors stemming from an alleged altercation with an ex-girlfriend. Mr. Johnson is completely and unequivocally innocent of all charges. These charges are completely outside the realm of Mr. Johnson’s character; he has no prior criminal record and has never been in trouble with the law. Furthermore, any assertion that the UFC played a part in posting his bail or in covering up the incident is completely untrue. Unfortunately, professional athletes are frequently made the victim of such false accusation. We ask that judgment is withheld until all relevant facts are known.”